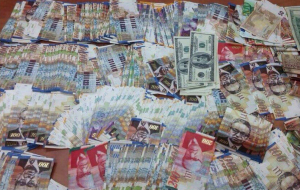 IDF with Shin Bet security forces confiscated tens of thousands of shekels that were paid by terrorist organizations to the families of the terrorists who murdered 1st Sgt. Hadas Malka.

During the night, IDF forces operated in cooperation with Shin Bet security forces in the village of Deir Abu Mash’al in the Binyamin Regional Brigade.

During the operation, the forces confiscated tens of thousands of shekels that were paid by terrorist organizations to the families of the terrorists who murdered First Sergeant Hadas Malka in the attack on Damascus Gate last June. The money was collected in order to rebuild the terrorists’ homes, which were destroyed by the defense establishment.

Also last night, IDF soldiers from Judea and Samaria, Border Police and Israel Police conducted a joint operation in the villages of Idhna and Al-Koum near Hevron, during which they arrested persons suspected of illegal residency, theft, damage to security infrastructure and the transport of illegal residents. Seven suspects were arrested during the operation.

18 wanted persons were arrested last night by the Israel Defense Forces, the Shin Bet security service, Border Police and Israel Police in Judea and Samaria. One of the arrestees is suspected of involvement in terrorist activities and of violent disturbances against civilians and security forces.