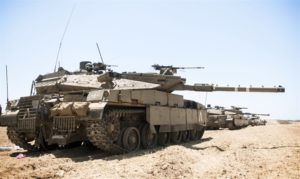 The IDF has begun gathering tanks, artillery, infantry troops and engineering vehicles along Israel’s southern border with Gaza, possibly as a deterrent to an anticipated escalation of terror attacks on the IDF & Israeli communities.

The IDF started ramping up its armored forces along the Gaza border on Thursday in a daylight show of force following a Security Cabinet decision to escalate retaliation for any violent incidents originating in the strip.

Among the forces that amassed at the border were dozens of tanks, artillery, infantry APCs and engineering vehicles.

In addition, flight routes at Ben-Gurion Airport were changed Thursday due to the security situation. The Israel Airport Authority stressed, however, that the change “doesn’t affect flights schedule.”

Israelis living in communities by the border fence say they have not seen such a significant concentration of IDF forces in the area in years.

“It only looked like this during Operation Protective Edge or several years ago when there were tensions. It feels like something is about to happen, or they want to send a message to Hamas to beware,” one resident said.

Among the troops were also soldiers from the IDF Spokesman’s Unit, which another resident said may be there to help send a message ahead of Friday, when thousands of Palestinians are expected to riot as part of the ongoing “March of Return” campaign that began on March 30.

About 200 Gazans have been killed by Israeli troops since the border protests began, according to Palestinian Health Ministry figures. Palestinians have launched incendiary balloons and kites into Israel and on occasion breached an Israeli frontier fence.

“It’s possible that the fact these vehicles are close to the road and everyone can see them is meant to serve as a deterrent,” said Shmuel, who lives in Kibbutz Yad Mordechai. “I hope there’s quiet on the other side, after they realize they have a lot more to lose than gain when they attack us.”

With the deployment clearly visible from main Israeli roads near the Gaza Strip, senior Egyptian security officials met leaders of the enclave’s ruling Hamas to try to calm tensions. The Egyptian delegation, which left the strip on Wednesday after spending a day there in an effort to promote ceasefire talks, is led by Ahmed Abdelkhaliq, who heads the Palestinian issue in the Egyptian intelligence services.

The Egyptian delegation in Gaza – Ynet (not attributed)

A Palestinian official said the Egyptian delegation was also in contact with Israeli leaders to curb the current tensions.

“The situation is delicate. No one wants a war,” he said.

“Palestinian factions are demanding an end to the Israeli blockade that strangled life and business in Gaza,” the official told Reuters.

GOC Southern Command Maj. Gen. Herzi Halevi warned Wednesday that “the rampant violence on the Gaza border in the form of incendiary balloons, explosive devices and rockets is only exacerbating the situation of Gaza’s residents.”

“The IDF is prepared for all future scenarios and has the know-how to respond with greater power,” he added.

Two rockets fired from the Gaza Strip early Wednesday landed inside Israel, one hitting a Be’er Sheva home and causing great damage and the other falling in the sea off the shores of a central Israeli city.

Seven people were treated for shock in Be’er Sheva, including a 39-year-old mother and her three children aged 9, 10, and 12, who were in the house when it was hit. In addition, three people were taken to the Soroka Medical Center in the city suffering from light bruising sustained when falling as they were running for shelter.

Last Friday saw an unusually brazen incident on the border when some 20 terrorists blew up a hole in the border fence and infiltrated Israel. IDF forces opened fire on them, scaring most of them back into the strip. Three who continued advancing on IDF positions were shot dead. One of them was able to reach several meters from an IDF position armed with a knife. He was then shot dead at close range.