How did one terrorist manage to infiltrate the border and stab a Moshav Sdei Avraham resident? This question stands at the center of an investigation being conducted in the Gaza Division since Monday morning.

On Monday, shortly before 4 am an infiltrator broke into the home of Yael Matzpun at the Eshkol Regional Council.

An initial probe into the incident, found that if not for the mother’s resourcefulness, the incident could have ended with casualties.

Haruv Battalion forces that arrived at the scene, conducted a chase after the terrorist; shooting and killing him in the nearby fields.

An initial investigation revealed that this was not an organizationally-backed terror attack and that it is almost impossible to track terrorists using the “sole attacker” method and consequently, to warn the armed forces.

It is estimated that the terrorist managed to walk 4-8 km undetected from the moment he infiltrated Israel from the Gaza Strip and through the border fence.

Security forces were unsuccessful in locating the infiltration and he managed to reach Moshav Sdei Avraham in the Shalom region of the western Negev and enter the house, uninterrupted.

While her four children slept, the terrorist threatened Yael with a knife and an iron rod and managed to stab her in the face and shoulder, causing light injuries.

Yael’s father Danny Matzpun told Ynet that “she pushed him into the bathroom adjacent to the bedroom and shut the door on him, using her child’s bed”. 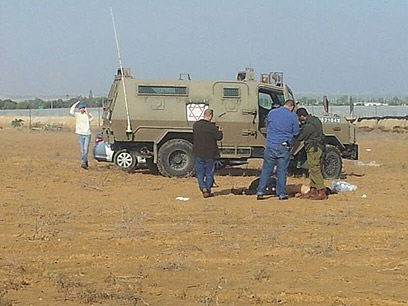 Prior to this incident, Gaza Division senior officers said that one of the main purposes of the IDF’s activities in the Gaza vicinity area is thwarting infiltration attempts into communities adjacent to the border.

They also said that an incident like this, in which a terrorist makes physical contact with the residents of a community, constitutes an operational failure.

There have not been infiltration terror attacks in the Gaza vicinity communities for a number of years. One of the reasons lies in the Gaza “security zone” – a territory of 300 meters from the fence in which Palestinians are not permitted to enter.

This is an open, exposed area and each entry into it is recorded; immediately calling forces to the area. This policy has been softened since the ceasefire with Hamas, following operation Pillar of Defense.

Throughout the weekend, hundreds of Palestinians were seen congregating near the fence in the area of the southern Gaza Strip town of Khan Younis. Some cut the fence and one of them infiltrated into Israeli territory but was caught by soldiers and brought back to the Strip.

The IDF Spokesman’s Unit said in response saying, “the investigation is not over. When it ends, conclusions will be drawn and lessons will be learned”.