IDF spokesperson chief Brig. Gen. Mordechai explains the media’s influence on warfare & reveals that the IDF is producing a film about Jenin, for internal educational use for it’s soldiers.

During a conference held by the Israeli Lawyer’s Guild in the southern town of Eilat, IDF Spokesman Brig. Gen. Yoav “Polly” Mordechai spoke about the important role media and culture have on the workings of the IDF, focusing on the influence of hasbara on the IDF’s legitimacy. 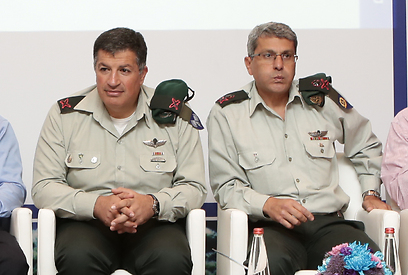 “Hence, in an age when war is screened live, before the camera’s lenses, spokespersons and hasbara have an increasingly critical role and influence military operations’ legitimacy.

He also revealed that the IDF is producing a film of its own to counter the accusation made by Mohammed Bakri‘s film “Jenin Jenin” 11 years ago. The film was created for internal IDF use to sharpen “the objective description of the event from the military standpoint” and will be screened “before senior IDF officers and soldiers, so that they won’t be exposed only to Bakri’s documentary.”

According to Brig. Gen. Mordechai, “public opinion is the regulator influencing the sphere of law, international powers and human rights organizations.

In light of this, he explained that there is an increased investment by the IDF in gathering visual materials, such as drone videos, and intelligence for hasbara purposes. Regarding the film “Jenin Jenin,” the IDF spokesperson said: “Despite the long period of time that has passed since the battle, the IDF has been active in its regard. Lately, the IDF Chief of Staff met with representatives of families of soldiers and those who lost their loved ones in the battle.

Major General Danny Efroni, the IDF’s Chief Military Advocate General, spoke about the importance of integrating legal advice into the IDF’s operational military activity. “Combat does not end on the battlefield when the last tank leaves the Gaza Strip. It continues on the legal front-line, as was the case in Operation Cast Lead.

“The IDF is editing a film, for internal military use, which retells the objective description of the event from a military standpoint, and plans to present it before senior IDF officers, so that they won’t be exposed only to Bakri’s documentary.”

Brig. Gen. Mordechai further said that the IDF has turned to official State and judiciary officials “to examine if it is possible to take action against Bakri’s film, which is full of hate and lies.”

“The IDF and the Chief Military Advocate General’s office have learnt from the past’s lessons in regards to advising and also enforcing (legal issues), and these lessons were implemented in Operation Pillar of Defense.”