The President of Kenya’s appearance before the ICC removes obstacles which may have previously blocked Palestinians from successfully getting the court to take on cases against Israeli military & political leaders.

Kenya’s president attended a hearing at the International Criminal Court on Wednesday, making him the first sitting world leader to appear in The Hague-based court. 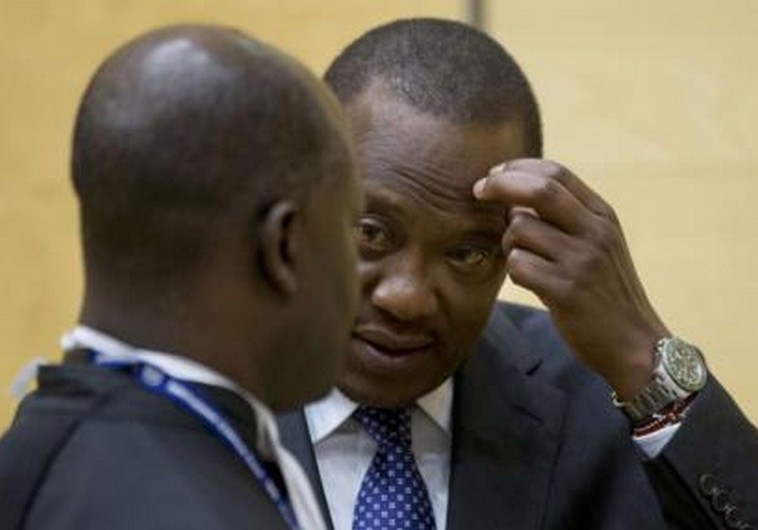 The implications of the case for the ICC’s overall power and its ability to pressure top leaders from countries, possibly in the future including Israel, cannot be underestimated.

Uhuru Kenyatta did qualify his appearance by saying he would be going in a personal capacity.

In an extraordinary speech to parliament, Kenyatta said he was appointing his deputy, William Ruto, as acting president in his absence to avoid putting the “sovereignty of more than 40 million Kenyans on trial” and was not attend in his capacity as head of state.

On one hand, Kenyatta’s very decision to attend when he had fought any ICC summons to attend hearings over a long period, was a coup for the ICC which could restore and even embolden it’s sometimes harried Prosecutor Fatou Bensouda.

In a time period where the Palestinians regularly discuss filing war crimes complaints against Israeli soldiers and leaders over the deaths of over 2,000 Palestinians during the recent Gaza war, an emboldened ICC could look more threatening from an Israeli perspective.

That is true even as Israel in principle supports the ICC’s goal of ending impunity for committing war crimes.

That is not to say that Kenyatta’s appearance removes the numerous obstacles which could block the Palestinians from successfully getting the ICC to take up cases against Israelis.

But certainly on a general and diplomatic level, increased ICC confidence would reduce some obstacles to ICC involvement in the Israeli-Palestinian conflict. However, in the midst of a possible victory, the charges against Kenyatta could be dismissed at Wednesday’s hearing after the prosecution asked for the case to be adjourned as it did not have enough evidence.

Such an outcome could erase the ICC’s achievement and even reverse the entire case into a massive defeat.

Once again, while Israel certainly supports reducing impunity, at this particular juncture, a weaker ICC more mindful of avoiding another embarrassment and diplomatic criticism, could help Israelis avoid problems.

Ruto, who will temporarily serve as president in Kenyatta’s absence, faces separate, but similar charges at the court.

Kenya’s Western allies and investors will likely welcome the decision to attend the hearing.

Snubbing the court might have led judges to issue an arrest warrant that would have unsettled financial markets and strained diplomatic ties.

“Let it not be said that I am attending the status conference (at the court) as the president of the Republic of Kenya,” Kenyatta said in a speech to explain his decision to put Ruto temporarily in charge while he travelled.

Kenyatta has attended hearings before he was elected to office last year. Ruto has gone while in office.

The collapse of the case would be a blow to a court that has handed down just two guilty verdicts, both to little known Congolese warlords, and one acquittal since inception in 2003.

Sudan’s President Omar al-Bashir, wanted for genocide, still travels to countries, particularly in Africa, that have ignored a warrant for his arrest, even when they are court signatories.

In his speech, Kenyatta echoed complaints heard across the continent that the court is biased and focuses on going after Africans.

“My accusers both domestic and foreign have painted a nefarious image of most African leaders as embodiments of corruption and impunity,” he said, repeating his previous denials of the charges by saying his “conscience is clear”.

He thanked the African Union which last year called for a halt to Kenyatta’s trial, saying serving leaders should not have to stand trial.

Kenyatta said that, because Ruto would be in charge, this demand would be upheld.

Kenyatta, from Kenya’s biggest Kikuyu ethnic group, and Ruto, a Kalenjin, were in rival camps in the 2007 election race. They were accused of inciting gangs who butchered people from opposing groups, using machetes and bows and arrows.

Victims of Kenya’s post-election violence have said the failure to secure any convictions so far means no one is being punished for the bloodbath that left about 1,200 people dead.

“We are disappointed, angry and pained as we have come to learn that we shall not get justice after years of waiting and hoping,” said Jacob Owino, a 33-year-old horticultural worker speaking near Naivasha, the site northwest of Nairobi where some of the worst violence in the weeks after the vote took place.

For Kenyatta’s backers, the case has prevented the healing of wounds in a nation where politics runs along ethnic lines.

“We are disappointed with the ICC summons targeting our innocent president,” said Amos Kinuthia, a Kikuyu who lives in the Naivasha-Mai Mahiu camp, where he fled with his family when his home was attacked after the vote.

The prosecution has struggled to gain any momentum in both the Kenyatta and Ruto cases. Several witnesses have withdrawn, with prosecutors alleging intimidation, denied by the defense.

The case has had limited impact on Kenya’s financial markets as it has rumbled on, in part because investors have expected Kenyatta’s trial to fall apart as witnesses have dropped out.