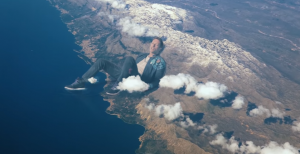 Released on Monday, the video has already garnered close to 3 million views, and is the third single released from Coldplay’s new album titled A Head Full of Dreams.

The 4-minute short is rich in surreal imagery which, if broken down into individual shots, could easily adorn the walls of a hip gallery or make its way onto the pages of a coffee-table book. The striking visuals transform elements of daily life into magical scenarios reminiscent of dreams, playing with proportions in the realms of air, land, sea, and space.

Chris Martin, lead vocalist of the band, spoke highly of the video prior to its release in a radio interview. He referred to it as “one of the best videos…ever made,” and insinuated that even if sound were to be removed from the clip, the brilliance of its imagery would remain.

“I just saw it [the video] and was like ‘I can’t believe that was our video,'” Martin said. “If that was someone elses, I’d be so jealous.”

Heymann and Muggia indeed capture a different way of looking at things. Their interpretation of the whimsical, from a digital perspective, includes the juxtaposition of everyday objects in environments and situations unnatural to them: Paratroopers are captured diving into a bowl of pasta rather than the earth below, a stingray floats above a sea of surfers, a drying machine – rather than containing laundry – contains the depths of the sea, a volcano pops popcorn rather than lava, and the Empire State building stands tall in a cereal bowl, rather than on the streets of New York. It is bizarre. It is unique. And it is beautiful.

Vania Heymann is no stranger to the digital world. A graduate of the Bezalel Academy of Art and Design, he has a deep-rooted knack for atheistics and is well acclaimed in the arts world. His previous works include music-video direction for Bob Dylan, CeeLo Green, and Asaf Avidan, and commercial work for brands such as Pepsi and American Express.

Heymann shared the “Up&Up” video on Facebook upon its release to the public. He wrote that he was “especially proud and excited to present this clip,” and gave credit to those who made the production a reality.