India reports: Iran behind attack on Israeli diplomat in Feb.

The New Delhi Police has officially named Iran’s Revolutionary Guards responsible for the February 13 terror attacks against Israeli diplomats in the Indian capital. 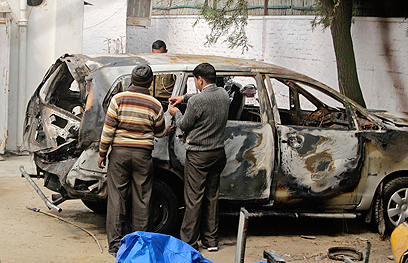 Scene of the attack – Photo: AP

The attack saw an explosion tear through a diplomat’s car in the vicinity of the Israeli Embassy in New Delhi. Tal Yehoshua Koren, the wife of one of the diplomats was injured in the blast.

According to the Time of India, the investigation has concluded that the Iranian suspects “discussed the plan to attack the Israeli diplomats in India and other countries with Indian journalist Syed Mohammad Ahmad Kazmi in January.”

The meeting took place after a hit on an Iranian nuclear scientist.

The investigation further found that Kazmi was in touch with the suspects and their Iranian handles for almost 10 years.

According to the report, Masoud is also considered the mastermind behind the attacks on the Israeli missions in Georgia, Bangkok and New Delhi.