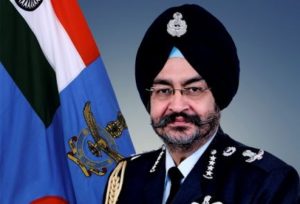 Along with dozens ‎of other air force chiefs visiting Israel for a special military conference, India’s Air Chief Marshal Birender Singh Dhanoa conveys in an interview: ‘The IAF is committed to ‎defending peace and stability. Israel not ‎only has aerial capabilities, it knows how to use them.’

The Israeli Air Force is held in high regard ‎worldwide and it has demonstrated multiple times ‎that it has a wide range of capabilities it does not ‎shy away from exercising, India’s air force ‎commander ‎said Wednesday.‎

Air Chief Marshal Birender Singh Dhanoa and dozens ‎of other air force chiefs are in Israel for a ‎weeklong visit, attending a conference hosted by the ‎IAF in honor of Israel’s 70th year. ‎

The last IAF conference of this kind was held in ‎‎1998 and marked Israel’s 50th anniversary.‎

‎‎”Recently, senior Israeli officials visited New ‎Delhi and were exposed to our activities, and now we ‎have had the opportunity to learn from them,” Dhanoa ‎‎told Israel Hayom. ‎

‎”We had the opportunity to watch the Israeli Air ‎Force’s weapons and its structure. We watched the ‎various activities and it was interesting to see how ‎things were being done. It was a very good visit,” ‎he said.‎

‎”I also had the opportunity to meet some Israeli Air ‎Force legends. I was looking forward to this visit ‎very much, marking the 70th anniversary of the ‎Israeli Air Force, and I was not disappointed. I met ‎colleagues from around the world and we exchanged ‎experiences.” ‎

As part of their visit, Dhanoa ‎and the other air ‎‎force chiefs met with IDF Chief of Staff Lt. Gen. ‎Gadi Eizenkot and IAF Commander Maj. Gen. Amikam ‎Norkin, and were brief about tensions with Iran over ‎its presence in Syria, as well as on a range of ‎other regional issues and how the IAF plans for ‎various scenarios. ‎

While Dhanoa refrained from commenting directly on ‎issues involving Iran, as New Delhi and Tehran enjoy ‎stable bilateral ties, he noted that he was very ‎impressed with Norkin’s presentation Tuesday, which ‎revealed that Israel is the first country ‎in the world to have flown ‎the U.S.-made F-35 stealth fighter jets in combat.‎

Israel’s F-35 Adir was photographed flying over Beirut completely unnoticed. There must have been TWO… someone took this picture. – Screenshot: IAF/Israel’s TV NEWS

‎”The Israeli Air Force is highly respected around ‎the world. It is very clear they are committed to ‎defending peace and stability, which are maintained ‎due to this military might, among other things,” he ‎said.‎

“It’s [the IAF’s] regional superiority and control ‎are undisputed. From what we have seen, Israel not ‎only has [aerial] capabilities, it knows how to ‎use them. The Israeli military seems very ‎confident in its abilities to carry out missions ‎outside Israel.” ‎

Dhanoa stressed that ‎”the ties between our two ‎countries are strong. We have acquired many defense ‎technologies from Israel and your air force is ‎operating them, so [our] cooperation is stable and ‎functioning well, and we now had the opportunity to ‎meet the units behind these collaborations.‎

‎”We pursue the acquisition of high-tech weapons from ‎Israel and we are happy to continue to cooperate in ‎this way. We greatly appreciate the ties between ‎India and Israel. This conference has bolstered the ‎connection between our two corps and we now ‎understand the Israeli military better.”‎

Dhanoa is expected to fly back to India on Thursday ‎night after the conference ends on “the wonderful direct flight to New Delhi that ‎was recently launched,” he said.

The Indian general also noted how impressed he was ‎by Israel’s connection to its historical heritage. ‎

‎”I will take from Israel the dedication, the fact ‎that things were built here with people’s sweat. We ‎were exposed to the history we read about and we met ‎the people who created it. For me, it was an amazing ‎experience,” he said. ‎