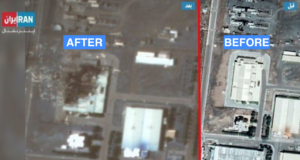 “In the past several months, there have been dozens of so-called ‘accidents’ the Iranians claim are taking place […] That is no longer a credible claim, considering the sheer numbers of them,” Keane told Fox News.

“There are two countries that have the capabilities to do this: the US and Israel.”

“This is a covert espionage campaign likely being conducted by the Israelis, and being assisted by informants inside Iran and others part of the resistance movement inside Iran,” Keane concluded.

“I don’t think the Mossad could do this without assistance.”

Keane said he thought the alleged strikes were “a smart strategy” on the part of Israel.

“If you accept the objective that we don’t want Iran to have nuclear weapons with missiles that can deliver them, then the strategy the Israelis are doing, likely with at least the moral support of the US, is fairly savvy because it gives the Israelis deniability,” he explained.

“What we’re not dealing with is air strikes on the missile and nuclear sites,” he said, in which case “Obviously it would be known that the Israelis are delivering that. And that would force the Iranians to escalate up.”

“This gives them the capability of denying it and making them much more patient and less likely to have this cyber and kinetic espionage lead to war. The Iranians don’t want that, and the Israelis, I think, are executing a strategy which has already slowed down this program by a year or two, and they may not be finished yet.”

“I don’t believe the Iranians will respond very strongly, because they’re waiting for the November elections in the US to determine who they should negotiate with,” Keane added.

Asked how he thinks the Iranians would respond to a Biden presidency, Keane said he didn’t know how Biden would behave were he elected but noted, “Biden was part of the team that construed the nuclear deal which brought us the debacle that we’re dealing with, which actually permits Iran to acquire a nuclear weapon, when you would think the purpose of the nuclear deal would be to prevent them from having one.”

“So he could be along those lines again – but hopefully not.”