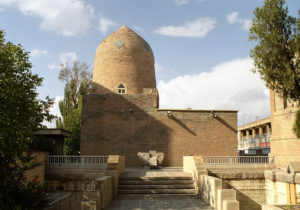 It is not entirely clear whose idea it was, but in 1968, a vigorous correspondence developed between Jewish representatives in the Iranian parliament and officials from the regime of Shah Mohammad Reza Pahlavi, Iran’s ruler at the time. The focus of this exchange was an attempt to purchase the Tomb of Esther and Mordechai at Hamedan. The pretext? Celebrations marking the 2,500th anniversary of the Edict of Cyrus, which were to be held in 1971.

The Edict of Cyrus dates to the year 538 BCE. In his historic declaration, Cyrus the Great, the founder of the first Persian Empire, allowed all peoples living in the territories under his control to return to the worship of their respective gods and deities, following the religious prohibitions which had existed under the newly-defeated Babylonian Empire. In the Hebrew Bible, (Ezra 1:1-4) we find a special version of the decree, addressing the People of Israel in the diaspora, and permitting them to return to Judea and rebuild the ruined Temple.

The tomb of Esther and Mordechai, a drawing by Eugène Flandin, 1851 –
Photo: Wikimedia Commons

The first known account which links the mausoleum at Hamedan to the figures of Esther and Mordechai, the heroine and hero of the festival of Purim, comes from Benjamin of Tudela, a wandering Jewish traveler of the 12th century:

“From that mount to Hamedan is a journey of ten days; this was the metropolis of Media and contains about fifty thousand Jews. In front of one of the synagogues is the sepulcher of Mord’khai and Esther.”

According to one of the traditions associated with the tomb, after the death of King Ahasuerus, the followers of Haman sought revenge against Esther and Mordechai. The two managed to escape to Hamedan, where they settled down and eventually passed away at a ripe old age among the local Jewish community. But what does all this have to do with Cyrus the Great? At first glance, very little at all. However, it is clear from certain letters discovered at the Central Archives for the History of the Jewish People (CAHJP), in the archive of the World ORT Union organization, as well as from historical sources relating to the life of Iran’s last Shah, that Mohammad Reza Pahlavi saw himself as the modern heir of Cyrus the Great, and sought to project this image of himself to the Jews of his country. The 2,500th anniversary of the Edict of Cyrus was exactly the kind of event he was waiting for.

In a letter sent by the director-general of the Department of Archaeology and Public Education, Mr. Abdolali Pourmand, to Mr. Lotfollah Hay, the representative of Iran’s Jews in parliament, Pourmand clarified that the office of National Education would assist the Iranian Jewish community in purchasing the tomb and the land surrounding it from the Bazargani Bank, its owner at the time. The purchase would be funded by the selling of tickets to the site.

In the correspondence, the sense of urgency expressed by the regime’s representative is clear. Pourmand pressed the Jewish community to reply to the initiative – with an affirmative response being the obvious preference – as the department’s queries had so far gone unanswered.

In addition to the tomb-purchasing initiative, the Jewish community also planned to build a vocational school named after Cyrus the Great, as well as a hospital. There were even plans for a Hebrew-Persian dictionary and an exhibition dedicated to Cyrus’ achievements which would focus on the topic of Torah-based human rights, in various languages. It is unclear how much of all this actually came into being. The archives, however, do include evidence that the purchase of the grounds of the tomb was indeed completed, with final approval arriving on January 18th, 1970. It appears that the land was transferred into the hands of the community – though it is difficult to say for certain as the documentation ceases at this stage.

The honeymoon period between the Jews of Iran and the state authorities would come to a quick, cruel end with the Islamic Revolution of 1979 and the rise to power of Ayatollah Ruhollah Khomeini. This event also saw the last Shah of Iran, “The New Cyrus”, flee the country for the United States.

Since then, the tomb of Esther and Mordechai has been the focus of bitter dispute. In 2011, regime-supporting students rioted outside the compound and called for its removal from the list of protected Iranian heritage sites – as a response to their claims that Israel was seeking to destroy the al-Aqsa Mosque. Their efforts were something of a success, with the sign noting the tomb’s status as a site of pilgrimage being removed. From time to time, protesters from across Iran issue threats to destroy the tomb and replace it with a Palestinian consulate. A recent incident of this kind occurred in February. So far however, the site remains intact, with only Jews allowed entrance to the tomb enclosure.

Despite the long-standing tradition linking the tomb to the figures of Esther and Mordechai, scholar Thamar Eilam Gindin tells us that Persian or Iranian sources do not contain any evidence attesting to the story of the Megillah, the story of Purim. One of the leading theories today suggests that the tomb is actually that of Shushandukht, the Jewish wife of Yazdegerd I, a ruler of the Sasanian Empire during the fourth and fifth centuries.

The interior of the tomb, photo by Nick Taylor – Photo: Wikimedia Commons

The city of Hamedan was once the capital of Media, which was captured by Cyrus the Great, who made it the summer capital of the Persian Empire. Today Hamedan is associated with the city of Ecbatana, mentioned in the Book of Ezra.

Many thanks to Thamar Eilam Gindin for her assistance in the preparation of this article, to Elitsour Lion for his translations and to Dr. Miriam Caloianu from the Central Archives for the History of the Jewish People for sharing this story with us.