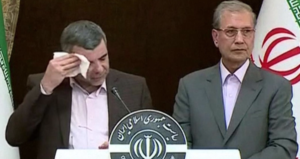 For Iraq, Bahrain, Oman, Kuwait, Lebanon and other countries now infected by the coronavirus because of the Muslim pilgrimage to the infected holy city of Qom, and the theocrat government’s subsequent decision to not consider the issue an emergency, Iran couldn’t care less if thousands will die.

On Monday, Iranian official Ahmad Amirabadi said there have been up to 50 deaths in Iran from coronavirus. The regime did what it knows how to do best: It sought to silence him and condemn him for spreading the news, claiming that only 12 had died from the virus and that there were only 61 cases in the country.

However, for five days Iran has known that there were likely more cases concentrated in the holy city of Qom, where religious pilgrims gather.

Iranians have been largely left in the dark since last Wednesday, when two deaths were announced in the Islamic Republic from coronavirus. The regime wanted elections to go well on February 21, so it sought to prevent any news of the virus for days.

By Saturday it was too late, and the country moved to shut down schools and universities. But Iranians and other pilgrims who came to Qom and became sick with the virus were already on the move.

They flew back to Iraq’s Najaf and via Dubai to Bahrain, as well as arriving in Kuwait and Oman. Iran did not inform its neighbors until it was too late. Last Friday, Turkish government officials were already warning that there might be 750 cases in Iran.

Iranian Deputy Health Minister Iraj Hairichi and MP Mahmoud Sadeghi now say they are sick with the virus, and officials admit that many more are sick. New cases in Oman and Bahrain were announced Tuesday – all linked to Iran.

Iran has now set the Middle East ablaze with fears of coronavirus. The virus was mostly limited to China until two weeks ago. Then it moved rapidly to Italy and South Korea, where there are thought to be hundreds and 1,000 cases, respectively. But the regime in Tehran purposely hid the numbers of sick.

It may have done so partially out of incompetence, with a Health Ministry that did not know how to find, quarantine or test the sick. In fact, Iran has not done what China or Italy or other places have done. It has not been transparent and did not even quarantine the cases in Qom or elsewhere. Instead, Iran has acted like an incubator.

Iranian President Hassan Rouhani spoke with an Austrian delegation on Sunday. Iranian Foreign Minister Javad Zarif smiled and laughed with the Austrians. The virus was a big joke for the president and minister. Zarif later joked that he did not have the virus. Rouhani claimed the virus was like US sanctions: It seemed worse than it was.

Not far from where the men were laughing, Mojtaba Rahmanzadeh, mayor of district 13 in Tehran, was sick and hospitalized for coronavirus. He had been diagnosed on Saturday. But the Iranian regime was not pressed by the Austrians to discuss the issue.

AFTER IRAN closed schools and a university on Sunday and Monday, people began to demand answers and protective masks. By Tuesday, three more had died, bringing the toll to 15, the second highest outside China. Iran’s police were hunting for medical masks.

Face masks for sale on the internet. – Screenshot: Amazon

Fears of price gouging were rampant. The police claimed on Tuesday that they had found millions of masks hidden in warehouses. The virus appears to be a national emergency, because Ali Shamkhani of the Supreme National Security Council has attacked Amirabadi for spreading news of the 50 deaths.

Iran’s neighbors are fed up with the regime’s lack of transparency. They have closed their borders or instituted drastic checks. People who traveled to Iran and arrived in Najaf in Iraq, Bahrain and Oman are now sick. There are eight cases in Kuwait and six in Bahrain.

The UAE this week stopped dozens of flights to Iranian cities. Oman has stopped imports from Iran. Kuwait has closed borders and ports. Afghanistan has shut its border but is concerned over the thousands who cross illegally. Bahrain is stopping flights from the UAE.

Iran’s export of the virus has caused massive concern in Iraq. In Najaf there are now 20 people under observation for the virus. And Iraq is not well prepared. Medical masks are out of date, ministry phone numbers don’t work, and the country is struggling to stop travel to Najaf and suspend travel to Iran.

Iran and Iraq are closely linked in religious issues, weapons trafficking and trade. Cutting off these contacts is a major move. It comes at a bad time for Baghdad, after months of protests and with a new prime minister who lacks a government. In the Kurdistan region there are long lines at gas stations as people fear borders will close.

IRAN’S GOVERNMENT is in denial. Rouhani has claimed that the virus is no worse than the flu in the US that kills thousands of people a year. He claims the country, with divine help, will overcome the virus.

“The coronavirus is an uninvited traveler and goes to any country, but we have to overcome this problem,” he said Tuesday.

The truth is that Rouhani’s government has made the situation worse by covering up the extent of the virus and also by not providing transparent answers to the international community or Iran’s neighbors. The regime has gotten used to this over the last few months, after downing a Ukrainian airliner and killing 1,500 protesters. The deaths from the virus do not matter to the regime, as Rouhani indicates: If thousands die or even tens of thousands, it will be like any other flu virus, and the country will move on.

For average Iranians, becoming collateral damage to the country trying to preserve its reputation may not be what they bargained for.

It is already causing panic in the Gulf and Iraq. Health ministries from Erbil in the Kurdistan region to Abu Dhabi are trying to reassure people not to panic or spread rumors.

Tehran’s unwillingness to take part in a regional response to the crisis is not helping tamp down the rumors.

Iran’s regime has a siege mentality that is used to blaming foreigners for its problems. It blames foreign media for reporting on the virus. Even Iran’s authoritarian contacts in other countries will have warned it to take no chances with this virus. China knows what the results can be, as do Gulf states.

But Iran did not listen. It kept its Mahan Air and other carriers flying. Pilgrims kept coming because the theocracy, which is the regime, judged faith to be more important than science. Pharmacies are now out of masks in Iran. People are confused and worried – and so is the entire Middle East.