Is Al-Aqsa really a sacred site, or is it a tool to collect donations by trying to elicit global Islamic sympathy… just a goose that lays ‘golden eggs’ for its managers? 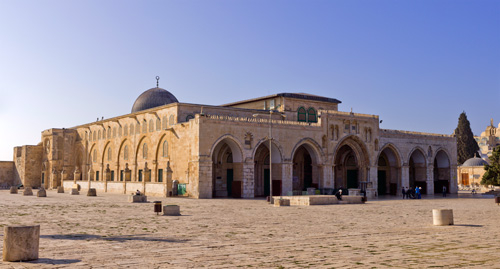 The Al-Aqsa Mosque has been one of the items at the center of the Arab-Israeli conflict. Almost every known Arab political organization has vowed “to liberate Al-Aqsa from the Jews.” In a recent visit to Jerusalem, where I visited and prayed at Al-Aqsa, it occurred to me that perhaps we, the Arabs and Muslims, are the ones causing harm to Al-Aqsa, and not, as we claim, the Jews.

In a recent visit to Jerusalem, where I visited and prayed at Al-Aqsa, it occurred to me that perhaps we, the Arabs and Muslims, are the ones causing harm to Al-Aqsa, and not, as we claim, the Jews.

“You see these scaffoldings? They [the officials] put them up to claim maintenance work is being done in order to beg donors for money. These scaffoldings have been here for years with nothing done….The sheikh here just takes photos of them to show to donors. Look at the donation boxes here; they collect an average of one million shekels ($284,000) per month. We have no idea where that money goes…The poor and the needy never see any of it.” — Members of the Muslim security staff of Al-Aqsa Mosque

In 1948, when the Jordanian government occupied Judea and Samaria, the Al-Aqsa Mosque was placed under the Jordanian Waqf Ministry, which oversees Islamic sites. In 1967, when Israel won the Six-Day-War and regained control over Jerusalem, it did not take control of Al-Aqsa. Instead, Israel transferred control of the mosque to the Jerusalem Islamic Waqf [trust], an independent religious body to oversee the Islamic holy sites there.

The Hashemite regime in Jordan continued to pay the salaries of the managers and the staff members of Al-Aqsa, in accord with what Jordan’s King Hussein described in 1988 as a religious duty he had inherited as the alleged descendent of the prophet Muhammad.

Israel’s responsibility has been limited to providing security and, when necessary, conducting patrols and searches. In addition, the Israeli security forces conduct a strict policy of refusing to allow non-Muslims — including Israeli Jews — into Al-Aqsa except for tourism purposes and only at certain hours of the day.

Upon entering the silver-domed mosque, one can quickly notice how neglected the mosque is, and badly in need of maintenance, with dirty walls, dust-covered ceilings and worn-out chairs, including the one on which the Imam sits. Fire equipment, tossed randomly in a heap in a corner, looks as if it has not been touched in a long time.

When they were asked about the shocking condition of the mosque, its staff members, although audio-recorded, spoke on the condition of anonymity:

“The officials themselves and the staff members are the reasons,” one of the Mosque’s Muslim security staff said. “This chaos and indifference rolls down from the senior officials here who enjoy huge salaries compared to the average staff member.”

He pointed at scaffolding stretching to the Mosque’s dome, “You see these scaffoldings? They [the officials] put them up to claim maintenance work is being done in order to beg donors for money. These scaffoldings have been there for years with nothing done… The sheikh here just takes photos of them to show to donors. ”

He points to two large donations boxes at the center of the mosque. “Look at the donation boxes here; they collect an average of one million shekels ($284,000) per month. We have no clue where that money goes…The poor and the needy never get any of it.”

At the center of Al-Aqsa, two glass cupboards exhibit tear gas shells used by the Israeli police during riots of the first Palestinian Intifada, which began in 1987. “We’ve had these since the first Intifada,” an Arab security guard said. “The managers here use these to make visitors sympathize and give donations, they are beggars’ tools, that is what they are.”

At the mosque’s washrooms where worshipers get cleansed according to Islamic precepts, graffiti on the wall states: “Sheikh Azzam Al-Khateeb has destroyed Al-Aqsa.” Al-Khateeb is the mosque’s general manager, who handles all financial and administrative affairs.

The custodians of the washrooms did not allow photos taken of the graffiti. Nonetheless, an elderly man beckoned and said: “They are slackers, we just have slackers in this place … This mess you see here is our responsibility; the wrongdoers are from us…among us… We cannot properly pray here, they [the staff] are bad people.”

When asked to name names, he refused, but said, “The wrongdoers are from our own folks, son. We are the ones who have destroyed Al-Aqsa… I have worked with the Jordanians, with the Jews, and the Palestinians, I have seen them all, and I know what is really happening.”

Another of Al-Aqsa’s custodians said: “There are no more Muslims left in the world who care for Al-Aqsa…. The money comes from Jordan not to the poor people, but just to be handed to those running it. They are all thieves. Al-Aqsa is like a plate of food that all dogs are attacking for a bite…. All of those inside the Waqf are thieves…. They all blame each other while actually they are working together. You should see the trash that mounts up here during Ramadan [when people come to visit]; the officials are not committed to their responsibility at all. All the donations and aid money paid for Al-Aqsa by Arab states do not filter here; we do not see any of it here. Jordan provides the money for salaries here, but it provides zero accountability for the staff handling the money.”

Another staff member joins the discussion: “Jordan and all Arab countries that give money to Al-Aqsa must be collecting much more donations than what they actually give out, otherwise, trust me, they wouldn’t be giving anything at all. Look at the washrooms, the government of Turkey provided $2 million dollars to fix and expand those, and then Al-Aqsa’s administration collected $2 million more in donations [for the project]…still, nothing was ever fixed or built.”

When a group of staff members having lunch was asked why Al-Aqsa was in such a poor state, one of them answered: “You should ask Azzam Al-Khatib [Al-Aqsa’s manager]; ask him why Al-Aqsa is dirty and full of flies. All Arab countries donate money for Al-Aqsa; ask Azzam Al-Khatib where does that money go?!” Another man said: “We do not even have proper loudspeakers for the worshipers to hear the Imam. Would those Jews do that to us if Al-Aqsa were under their management?”

A staff member at the nearby Dome of the Rock, where the Quran states that Prophet Muhammad ascended to the sky and met God, said: “The staff here is careless, they play a role in all of this bad state of affairs.” He added, “This is all the fault of the Jews; they are to blame for all of this.”

When asked how the Jews were responsible for the dirty walls, the worn out furniture, and the neglected facilities, he did not answer.

At the Al-Aqsa Mosque manager’s office, located within the mosque, there were no executive staff members with whom to meet. I was told no one was there.

Repeated calls to Al-Aqsa’s designated office at the Palestinian Authority Waqf Ministry, to request a comment, were never answered, not a single time.

As a practicing Muslim, I was sad to hear that those managing Al-Aqsa were more concerned with donations and their personal welfare rather than with the mosque itself.

Which prompts the question: Is Al-Aqsa an Islamically sacred site, or is it a tool to collect donations by trying to elicit global Islamic sympathy — just a goose that lays golden eggs for its managers?

It seems that it is we Arabs and Muslims who are harming Al-Aqsa, not Israel or the Jews.

Mudar Zahran, Jordanian of Palestinian heritage, holds 2 masters degrees from Southern New Hampshire University and is finalizing his PhD in Middle Eastern banking at the University of Bedfordshire, UK.

Zahran served at the US Embassy-Amman as an economic specialist and assistant to the policy coordinator until April 2010, when he was forced to flee Jordan, moving to the UK, as a political refugee.