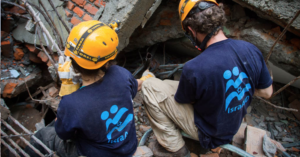 So far, 43 people are reported killed and about 13,000 homes damaged or destroyed on Abaco and Grand Bahama islands – about 45 percent of all the houses on the islands. Thousands of people are without shelter, often stranded by flooding, and facing food, water and medicine shortages.

“We are in the midst of a historic tragedy,” the Bahamian prime minister, Hubert Minnis, told the press. “The devastation is unprecedented and extensive.”

Hurricane Dorian pummels the Bahamas. Image via Shutterstock, with elements from NASA

Dorian made landfall on Grand Bahama in the early hours of Monday morning as a category 5 hurricane, and continued to batter the tiny archipeligo for an unprecedented 36 hours. Winds reached up to 295 kilometers (183 miles) per hour, making it one of the strongest Atlantic storms to hit the region.

Team members at the IsraAID HQ in Tel Aviv prepare packages of water filters for their transfer and distribution in the Bahamas. – Facebook

This year, IsraAID launched emergency missions to Mozambique, following the devastation caused by Cyclone Idai in March; and Colombia, as the country receives as many as 5,000 people per day fleeing the ongoing humanitarian crisis in neighboring Venezuela.

Earlier this year, ISRAEL21c flew to Puerto Rico to see first hand how IsraAID is helping the community recover from Hurricane Maria.

Click here for information on donating to IsraAID emergency response.

Just since 1999, Israel has touched down in quite a few locations to alleviate the sufferings from numerous natural catastrophes. In many, Israel was amongst the first to arrive, and the last to leave. This is part of Israel’s national mission of ‘Tikun Olam’.

These locations include:
1) Japan (As well as rescue teams, Israel supplied Geiger counters and Israeli thermal imaging cameras are monitoring the reactor cores – Mar 2011)
2) Ghana (has been receiving technological aid from Israel since 2006; Israel is now providing neonatal units to save many of the 4,800 babies that die each year – Mar 2011)
3) New Zealand (Israel sent several rescue teams, temporary shelters and water purification systems following the Christchurch earthquake in Feb 2011)
4) Chile, whose rescued miners were treated to a tour of Israel as part of their “Pilgrimage of Thanks” (Feb 2011)
5) Vietnam, whose milk industry is being totally transformed using high-yield Israeli cows (Feb 2011)
6) Uganda (Israeli solar-powered refrigerators were provided to store vaccines used to eliminate an outbreak of Polio from the country in Jan 2011)
7) Kenya (Israel”s Agency for International Development built a state-of-the-art Emergency Room in a hospital serving 6 million Kenyans in Jan 2011)
8) The Maldives (although non-Islamic worship is banned here, Israeli eye-doctors performed free operations for citizens in Dec 2010)
9) Philippines (signed major trade agreement with Israel in Nov 2010)
10) Romania (Israeli doctors treated babies following fire at a neonatal unit – Sep 2010)
11) Cameroon (Ophthalmologists from Haifa restored vision to patients and trained local medical teams in these procedures – Aug 2010)
12) The Congo (Israel were the first burn specialists on the scene following the oil tanker fire disaster in July 2010)
13) Angola (mines cleared by Israeli technology – July 2010)
14) Mississippi (bio-remediation technique used to clean up after oil spills was developed in Israel)
15) China (a major purchaser of Israeli technology, and recipient of medical aid and training)
16) South Africa (Israelis trained their doctors to perform circumcisions to prevent the spread of AIDS – July 2010)
17) Haiti (Israel set-up the largest field hospital to treat victims of the 2010 earthquake, the hurricane and the cholera outbreaks and provided vital assistance for over a year)
19) Sri Lanka (Israel conducted a massive airlift with food, 50 medical staff and rescue teams only 48 hours after the Tsunami in Dec 2004)
20) India (Israel sent an fully-equipped field hospital following Gujarat earthquake in Feb 2001)
21) El Salvador (Israel relief aid following earthquake in 2001)
22) Georgia (Israel contributed food and seeds for farmers following severe drought in 2001)
23) Turkey (Israel relief aid following earthquake in 2000)
24) Mozambique (Israel relief aid following floods in 2000)
25) Colombia (Israel sent medical aid and food following earthquake in 1999)
26) Venezuela (President Chavez has forgotten Israel”s aid following floods of 1999)
27) Central America (Israel sent emergency medical aid teams and equipment to help victims of Hurricane Mitch in 1998)
28) Pakistan (2005) and
29) Peru (2007) both accepted aid from Israeli NGOs following earthquake disasters. – Peru”s hydro-electric power plants are also being built and run by an Israeli company.

So, if none of this impresses you, and your group or organization has decided to boycott innovations, products and/or services from Israel, Here is a comprehensive list of activities that you may need to perform in order to comply with the boycott…. Lotsa luck!