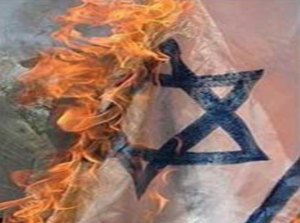 The amendment passed a second and third hearing by a majority of 38 MKs to 12.

Under the previous law, the maximum jail sentence for desecrating the flag was one year or a small fine of 300 shekels ($78).

The bill also gives the courts judicial discretion to take other measures, such as denying an individual convicted of burning the flag certain state-funded benefits, including scholarships and health and social security benefits, for up to six years.

Likud MK Nava Boker, who sponsored the bill, said last March: “I presented this bill following the incitement and riots we have been seeing in Arab towns in Israel. The current reality is unbearable — protesters are burning Israeli flags and just go on with their lives. The current penalties, which are ridiculous, are barely enforced. It is time to impose a harsher sentence and a hefty fine to end this disgraceful phenomenon.”

Boker said she believes harsher punitive measures will be able to generate deterrence and curtail incitement.

Meretz MK Issawi Frej slammed the bill, saying, “This bill will do nothing to prevent terrorism. I oppose burning the flag, but you’re dealing with nonsense.”