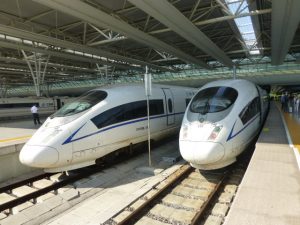 Katz approved the continuation of the high speed train between Afula and Tiberias as part of a project to expand the train network in the north on Wednesday. He said that the project will be implemented within 7 years with the completion of an eastern track connecting Afula with Tel Aviv.

The train line will begin at the Afula train station and will continue directly to Poriya Hospital on the outskirts of Tiberias. The total length of the new line will be about 18 and a half miles, and will include a number of new tunnels and bridges.

The Jezreel Valley railroad between Haifa and Beit Shean via Afula is set to begin operations on fall of 2016. The high speed rail between Tiberias and Afula is set to link up to this line. In addition to a train which will stop in cities on the Jezreel Valley railroad and the Sharon railroad, there will also be a special express train which will go directly from Tiberias to Tel Aviv in one hour.Minister Katz praised the project, stressing that the route to will turn Tiberias and the surrounding area into a more attractive place to live and work. Furthermore, he said it will transform Tiberias into a metropolitan city in the eastern Galilee.

According to Katz, the high speed train to Tiberias, combined with a train to Kiryat Shmona and an advanced road network in the north will complete the connection of the Galilee with the center of the country.

The project also includes the construction of a cargo terminal next to Tiberias, which will enable the transportation of goods and raw materials to ports and airports. Additionally, it will encourage the construction of factories and industrial zones in the Galilee, and will expand residential areas in the northern region of Israel.

“The construction of rail routes to Tiberias will accelerate the establishment of high-tech factories and the strengthen the connection of the Galilee with the rest of start-up and high-tech nation,” Katz said.

Tiberias Mayor Yossi Ben-David expressed his delight with the new initiative on Wednesday.

“It is very important to be able to arrive on the train to Tiberias from Golani junction. There is no doubt that the train will generate growth for the city in a variety of ways; in employment, tourism, the quality of life and more. The fact that the the train line starts in Ben Gurion Airport will benefit Tiberias which is an international tourist city, and which sees nearly 2 million visitors per year from Israel and from abroad.”