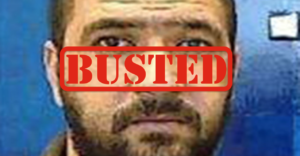 Israel’s internal Shin Bet security service announced that in April they arrested 32 yr-old Jordanian businessman Taer Shaafut, who was run by Iranian handlers to build business ties in the West Bank and Israel.

The Shin Bet domestic security service said Thursday that it has arrested a Jordanian businessman who attempted to set up an intelligence-gathering operation in the West Bank on behalf of Iran.

The businessman, who was named as 32-year-old Taer Shaafut, was arrested in April and was indicted 10 days ago by the military prosecutor for allegedly making contact with the enemy, making contact with a hostile organization, and conspiring to bring enemy funds into the area.

The Shin Bet said Shaafut entered Israel on behalf of Iranian intelligence in order to recruit spies to gather intelligence for Iran.

Shaafut, who is originally from Hebron, held meetings with the Iranians in Lebanon and Syria over the past two years. He was instructed to establish business ties in the West Bank and Israel in order to gather information.

“As part of his contacts with his Iranian handlers, Shaafut proposed and even received approval for the establishment of a factory in Jordan that would employ Shi’ite workers for future Iranian activities,” the Shin Bet said.

“The Iranian handlers expressed willingness to invest an initial sum of some half a million dollars and then whatever he funds he required at a later date.”

According to the Shin Bet, the Iranian handlers gave Shaafut encrypted communications equipment through which information was transferred and meetings arranged – and that the Iranians wanted to use this equipment to transfer money to terrorists.

“At the end of his activities on their behalf, he was dispatched to Israel, he was expected to travel to Iran to complete his training as an agent and to carry out advanced training in espionage and intelligence,” the Shin Bet said.

“This affair is another example of Iran’s ongoing attempts to set up infrastructure for operations against Israel in a variety of ways, by investing considerable efforts and resources,” the agency said.