Israel seeks to reclaim its place in clean renewable energy after having been a pioneer of solar energy in the 1950, by leading the world in the use of solar water heating systems, but neglecting the path when natural gas was discovered a decade ago. This project should provide 2% of Israel’s electricity needs, enough for a city of 110,000 households.

In the middle of southern Israel’s desert, engineers are hard at work building the world’s tallest solar tower, reflecting the country’s high hopes for renewable energy. 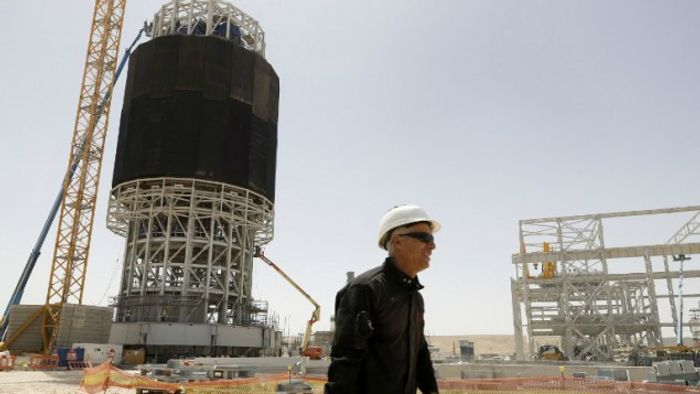 A worker walks past the solar receiver at the construction site of the Ashalim solar tower near the southern Israeli kibbutz of Ashalim in the Negev desert on May 26, 2016. – Photo: Jack Guez/ AFP

Once completed in late 2017, the Ashalim Tower will rise to 240 meters (787 feet), taller than Paris’s Montparnasse Tower and London’s Gherkin, according to the Israeli government and the consortium building it.

Covered in stainless steel, the square tower in the rocky Negev desert with a peak resembling a giant lighthouse will be visible from dozens of kilometers (miles) away.

A field of mirrors covering 300 hectares (740 acres) — the size of more than 400 football pitches — will stretch out from its base, directing sunlight toward the tower’s peak to an area called the boiler, which looks like a giant lightbulb.

The boiler, whose temperature will rise to 600 degrees Celsius (1112 Fahrenheit), generates steam that is channeled towards the foot of the tower, where electricity is produced.

Israel’s government launched a tender for the project in 2013, committing to purchase electricity from it over 25 years as part of a shift towards renewable energy and energy independence.

Clean at a cost

The country mainly generates electricity using plants fired by coal, natural gas and fuel oil. Its domestic supply of natural gas has grown with the discovery of fields in the Mediterranean. 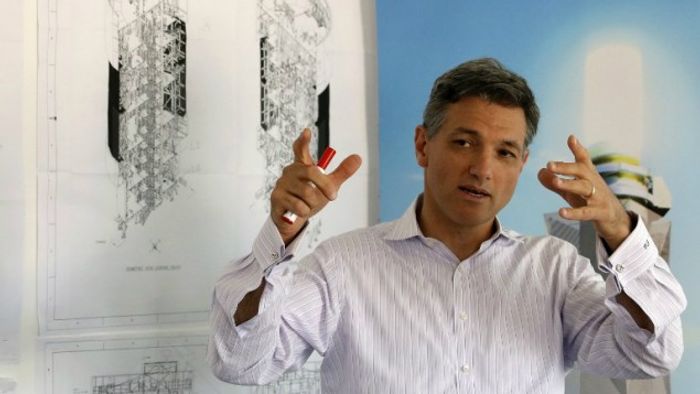 Eran Gartner, the Chief Executive Officer of Megalim Power Ltd, in an office at the construction site of the Ashalim solar tower in the Negev desert. – Photo: Jack Guez/ AFP

Solar requires a major investment, though costs are gradually coming down.

Energy from a solar tower is “two to three times more expensive to produce than classic electricity plants using carbon or fuel”, said Eran Gartner, who heads the Megalim consortium managing the project.

The tower should provide 121 megawatts, or two percent of Israel’s electricity needs, enough for a city of 110,000 households.

The country of eight million people is seeking to make renewable energy account for 10 percent of its total consumption by 2020.

Solar power offers a clean alternative to fuel- and carbon-fired electricity plants, which contribute to global warming with their heat-trapping CO2 emissions.

“The government agreed to move ahead with this technology — even though we do not hide the fact that it is more expensive than traditional electricity production — precisely to achieve lower costs over time,” Gartner said at the site.”The second solar tower will be slightly less expensive, the third much less expensive, et cetera.”

He predicted a futuristic landscape of towers overlooking the desert.

Israel could in theory meet all its electricity needs through solar energy by using only four percent of the Negev desert, said Eitan Parnass, head of the Green Energy Association of Israel.

Israel’s offshore gas finds are a major boost toward energy independence, but Parnass said it must continue to diversify to avoid reliance on a single source in the turbulent Middle East.

“We are in a situation where we cannot simply look at the economic aspect,” he said.

“Israel has no choice but to diversify its energy independence, first for reasons of security.”

However, critics have panned the project as too expensive and complex compared to other solutions.

Yael Cohen, an Israeli lawmaker with the opposition Zionist Union alliance and co-chair of the Green Movement political party, said the project has “requirements so demanding and costs so high” that it cannot be replicated. 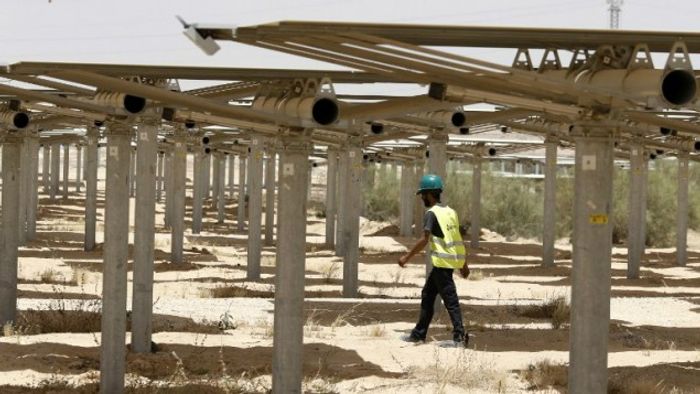 A worker walks past some of the 55,000 mirrors directing sunlight toward the Ashalim solar tower. – Photo: Jack Guez/ AFP

Solar power has for years formed a part of life in Israel, where rooftop panels are often used to heat the water tanks of homes.

A solar tower and its field of mirrors, a technology known as concentrated solar thermal, is only profitable as part of a large-scale project, unlike a photovoltaic field, where each panel acts as a small generator.

The Ashalim tower will be equipped with 55,000 projecting mirrors, amounting to a total reflective surface of a million square meters (10.8 million square feet).

Like sunflowers, the mirrors will turn toward the path of the sun.

Engineers have developed reservoirs for the task of storing heat when the sun is not out.

“It’s the big plus of solar tower technology… centralisation and stockage of energy at nighttime opens the path to massive use of solar electricity in Israel,” said Parnass.

Solar towers have already been built in locations such as Morocco, South Africa and California, where the world’s tallest at present — standing at 137 meters — is located in Ivanpah in the Mojave desert.

“We multiplied the size of the mirrors by three compared to the previous generation,” Gartner said.

“Everything is connected by WiFi instead of by cables. The tower and its boiler are also designed to reduce costs. Everything is done to pursue profitability.”