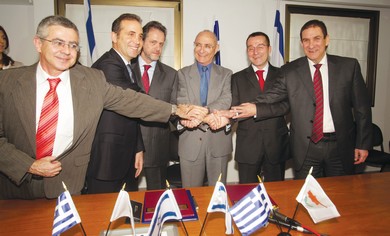 For both Israel and Cyprus, connecting the countries through an underwater cable will foster more than just electrical stability for two energy islands – it will further the sense of “duty and friendship” between two allies, Athanasios Ktoridis, chairman of the board of DEH Quantum Energy, said in Jerusalem on Sunday.

“Through this project we shall develop a better understanding of our diverse and bountiful cultures,” Ktoridis said.DEH Quantum Energy is owned by Greece’s DEH Public Power Corporation, Quantum Energy of Cyprus and the Bank of Cyprus.

Energy and Water Minister Uzi Landau signed a memorandum of understanding on Sunday with Ktoridis, Israel Electric Corporation officials, Cypriot Ambassador Dimitris Hatziargyrou and Greek Ambassador Kyriakos Loukakis, to signal the launch of a trilateral cable project that will ultimately link Israel’s electricity supply with that of the European Union.

“For Israel it is also important to just be connected to Europe,” Landau said. “We are an energy island and this has its political significance.”

The cable will be 287 kilometers long, buried at a depth of more than 2,000 meters and have a capacity of 2,000 megawatts – “one of the biggest in the world,” according to Yakov Hain, senior vice president of engineering projects at IEC.

The project is slated to start immediately, with a feasibility study presented to all three governments in roughly six to eight months and then a fully operational system on board by 2016, Hain said.

“We are anxiously waiting for the results of this feasibility study,” Hatziargyrou said. “It is an important development and it comes at a time when the relationship between Cyprus and Israel is blossoming. As we experienced this past summer in Cyprus [with] the construction of the power station we really feel the need for what we call energy security.”

Ultimately, electricity lines will run from Israel to Cyprus to Crete, and then through the exisiting cable to mainland Greece, enabling the connection of European and Asian electricity supplies, Hain said.

The cost of the project should be roughly 1.5 billion euros, but there is no official estimate yet, he added.

Hain foresaw this project as a first step toward achieving the vision of “global world energy interconnection.”

“The first thing that came to my mind was the crossing of the Red Sea when the Jews left Egypt, to the big world, to the homeland,” he said, showing a picture of Moses parting the waters. “We are also doing something like this – after 3,500 years, we will also be part of the big world.”

Since 1811, with the first submarine cable in Germany, countries have been laying electrical lines underwater, and the longest cable stands at 580 kilometers between the Netherlands and Norway. Energy giant Siemens is embarking on a project to connect the Scottish and English power grids through the Irish Sea, which is slated to be completed in 2015.

“We have a competition,” Hain said. “Maybe we will also be operational by 2015. This will move through the continents and be able to connect people.”

“I am sure that in the near future Israel will be connected not only to Cyprus but to the European grid,” Ron Tal said, adding that this will pave the way for more cooperative projects between IEC and DEH Quantum Energy.

Amid financial crisis, rather than compete against each other, Israel, Greece and Cyprus came together to invest in cooperative activity, Ktoridis said. Greece is in the process of increasing its energy efficiency and is becoming a more significant player in the “European energy chessboard,” while Cyprus will be able to secure the in-and-out energy flow, he explained. Israel, in turn, can become a major energy provider to the European continent and strengthen its own energy sustainability.

Although the great length, depth and power capacity of the planned cable is significant, these “are mere technological feats,” Ktoridis argued.

“Nothing would be possible if it were not for the fertile imaginations of our three countries,” he said. “We shall create a more optimistic and joyful world for our generations to come.”

Ktoridis presented Landau with a glass bottle of olive oil from Cyprus, which the minister said was a “good sign” for the start of this trilateral project.

“What we do today is just for the direct improvement of energy and economic relations between Israel, Cyprus and Greece,” Landau said. “This is just the first step… We hope this will be an anchor for stability in this beleaguered part of the world.”