The plant, called the Zafit power station, is located near Kfar Menahem in the country’s south-central region, and will significantly increase electricity generation to help deal with the ever-dwindling electricity reserves, according to the IEC. The combined-cycle plant contains a 125- megawatt steam unit that the company added to an already existing 250- megawatt natural gas turbine facility, and was constructed at a cost of NIS 1 billion. 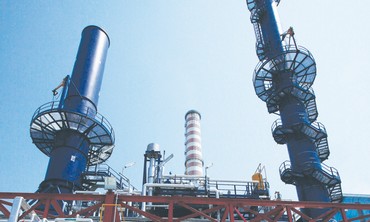 The natural gas turbines, which generate electricity for grid, also release a heat by-product that is used to power the steam unit, heating steam to extremely high temperatures that can then be converted to useable electricity.

In addition to the combined- cycle unit, two other production units at 120 megawatts each already exist at the Zafit power station, so total installed electricity capacity there will now be 615 megawatts.

IEC CEO Eli Glickman cited Israel’s waning electricity reserve – which dipped to as low as only 200 available megawatts during a heatwave earlier this summer – when he stressed the importance of the addition of the new facility.

“Israel Electric has invested about NIS 1 billion in this project and we will make every effort to increase reserves in electricity,” Glickman said. “In an era in which every single megawatt of electricity generation is needed, an additional 125 megawatts is significant to the stability of the electricity sector in Israel.”

Israel has a total of approximately 12,500 megawatts of installed capacity at its plants – which are powered by natural gas, fuel oil and coal.

The country also has a total of 190 switching and substations – indoor, outdoor and temporary.

Yiftach Ron-Tal, chairman of the IEC, likewise stressed the significance of adding 125 megawatts to this supply, and said that the company is striving to develop Israel’s electricity sector.

“Independent power producers must be encouraged to enter the electricity sector, and Israel Electric will do everything it can to assist in making this possible,” Ron-Tal said.

Once it has completed the combined cycle unit’s loading process – which should take several weeks – the IEC said it would be equipped to bring the new unit to its full efficiency shortly thereafter.