Israel: Jewish State has the most technologically advanced military on the planet 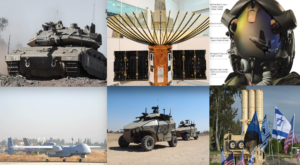 While 18 yr-old westerners are enjoying collage life, their Israeli counterparts embark on life-threatening operations behind enemy lines as IDF soldiers, fighting a war almost every decade, which sharpens their minds to be creative and come up with innovative weapons & ways to survive.

In 1950, just two years after the state of Israel was founded, the country’s first commercial delegation set off for South America.

Israel desperately needed trading partners. Unlike its Arab adversaries, Israel did not have natural resources to fund its economy. There was no oil or minerals. Nothing.

The delegation held a couple of meetings but was mostly met with laughs. The Israelis were trying to sell oranges, kerosene stove tops and fake teeth. For countries like Argentina, which grew its own oranges and was connected to the electrical grid, the products were pretty useless.

It’s hard to imagine this is what Israeli exports looked like a mere 67 years ago. Today, Israel is a high-tech superpower and one of the world’s top weapons exporters with approximately $6.5 billion in annual arms sales.

Since 1985, for example, Israel is the world’s largest exporter of drones, responsible for about 60 percent of the global market, trailed by the US, whose market share is under 25 percent. Its customers are everywhere — Russia, South Korea, Australia, France, Germany and Brazil.

In 2010, for example, ﬁve NATO countries were ﬂying Israeli drones in Afghanistan. How did this happen? How did Israel, a country not yet even 70 years old, become a superpower with one of the most technologically advanced militaries in the world that is changing the way modern wars are fought?

The answer, I believe, is a combination of a number of national characteristics unique to Israel.

First, despite Israel’s small size, about 4.5 percent of its GDP is spent on research and development, almost twice the Organization for Economic Cooperation and Development average. Of that amount, about 30 percent goes to products of a military nature. By comparison, only 2 percent of German R&D and 17 percent of the US R&D is for the military.

Another major contribution is the culture of innovation and creativity in Israel. Israelis are more willing to take risks than other nations. They get this from their compulsory military service during which they are tasked, at a young age, to carry out missions often with deadly consequences.

While Israeli 19-year-olds embark on operations behind enemy lines, their Western counterparts can be found in the safety of their college dormitories.

Lastly, Israel has been in a perpetual state of conflict since its inception, fighting a war almost every decade. This reality, of having your back up against the wall, sharpens the mind. It forces Israelis to be creative and come up with innovative ways and weapons to survive.

This is the Israel story …

The Guardium is a part of a new category of robotic weapons known as Unmanned Ground Vehicles or UGVs. Israel is the first country in the world using these robots to replace soldiers on missions like border patrols.

Already, Guardium UGVs are deployed along Israel’s border with Syria in the north and the Gaza Strip in the south.

The Guardium is based on a Tomcar dune-buggy-like vehicle and equipped with a range of sensors, cameras and weapons. It can be driven by a soldier sitting in a command center miles away or receive a pre-designated route for its patrol, making it completely autonomous.

An IDF unmanned ground vehicle, called a Guardium, patrols the border with the Gaza Strip.IDF
The increasing use of robots by the Israel Defense Forces is part of a larger strategy to minimize risk to soldiers when possible. In addition, soldiers require breaks, food and water. All a Guardium needs is a full tank of gas. Other UGVs in use by the IDF include the Segev, which is based on a Ford F-350 pickup truck.

Facing terrorists who use tunnels to infiltrate into Israel from places like the Gaza Strip, Israel is also relying on UGVs like robotic snakes to slither their way into underground passageways and enemy headquarters. The robots will then map out the structures, giving soldiers an accurate picture of a battle area before the place is stormed.

The same is happening at sea. Israeli defense contractor Rafael has developed an unmanned patrol ship called Protector which is being used by Israel to protect its strategic ports and patrol the country’s long Mediterranean coastline.

In 2000, the Israeli air force received its ﬁrst operational Arrow missile battery, making Israel the ﬁrst country in the world with an operational system that could shoot down incoming enemy missiles.

The idea to create the Arrow was born in the mid-1980s after President Ronald Reagan floated his Star Wars plan and asked America’s allies to partner in developing systems that could protect the country from Soviet nuclear missiles.

The Arrow was a revolutionary idea. Due to Israel’s small size and lack of territory, all ballistic missiles deployed in the region — Syria, Iraq and Iran — can reach anywhere within the country and pose a strategic and possibly even existential threat. Israel, the developers argued, needed a system that could shoot down enemy missiles over neighboring countries and provide overall protection for the tiny Jewish state.

The program had its ups and downs but got a huge boost in funding after the First Gulf War in 1991, when Saddam Hussein ﬁred 39 Scuds into Israel, paralyzing the country and forcing millions of Israelis into bomb shelters with their gas masks.

The Arrow was just the beginning. Today, Israel has the Arrow, which is partially funded by the United States, to intercept long-range ballistic missiles, David’s Sling to intercept medium-range rockets and cruise missiles as well as the combat-proven Iron Dome, which has intercepted hundreds of Katyusha rockets fired from the Gaza Strip in recent years.

Israel is the only country in the world that has used missile defense systems in times of war. These systems do more than just save lives. They also give the country’s leadership “diplomatic maneuverability,” the opportunity to think and strategize before retaliating against rocket attacks.

While other countries have also invested in missile defense, none has created a multi-tier architecture like Israel.

In 1988, Israel launched its first spy satellite into space, gaining membership in the exclusive club of just eight nations with independent satellite-launching capabilities.

A model of Israel’s Tecsar satellite, which uses radar instead of a camera to create high-quality images – Photo courtesy: IAI

From the beginning, there were those who doubted Israel was capable of developing, building and launching its own satellite, but in the nearly 30 years since that day, it has grown into a satellite superpower, now operating eight different spy satellites in space.

This is a critical capability considering the threats Israel faces from countries like Iran, which it still suspects is planning one day to build a nuclear weapon.

Israel has shied away from building big satellites and instead designs what are known as “mini satellites,” which weigh about 300 kilograms (661 pounds) in comparison to America’s 25-ton satellites.

1) Most of Israel’s satellites come with advanced high-resolution cameras like the Ofek-9, launched in 2010, which can discern objects as small as 50 centimeters (20 inches) from hundreds of miles away.

2) Israel’s other category of satellites are known as the TecSar. These satellites use a synthetic aperture sensor, basically a radar system that can create high-resolution images at almost the same quality as a regular camera.

The advantage this technology provides Israel is tremendous. A camera cannot see through clouds or fog, but radars can work in all weather conditions and can even see through camouﬂage nets. What this means is that Israel has the ability to track its enemies and gather intelligence on them at all times of the day and through rain, fog or clouds.

Israel’s success in developing state-of-the-art satellites has caught the world’s attention. In 2005, the French entered a strategic partnership with an Israeli company to develop a satellite, and in 2012, Italy ordered a reconnaissance satellite, paying $182 million. Singapore and India have also reportedly purchased Israeli satellites over the years.

It is referred to in Israel as the “drone that can reach Iran.” The Heron TP is Israel’s largest unmanned aerial vehicle with an 85-foot wingspan, the same as a Boeing 737 airliner. It can stay airborne for 24 hours and carry a 1-ton payload.

While Israel doesn’t openly admit it, the Heron TP is believed to also be capable of launching air-to-surface missiles.

Israel was the first country in the world to operate drones in combat operations. Its first use of drones was in 1969, when the Israel Defense Forces flew toy airplanes with cameras glued to their bellies along the Suez Canal to spy on Egypt. In 1982, it flew its first combat drone, called Scout, in Lebanon, where they played a key role in locating and neutralizing Syrian anti-aircraft missile systems.

That operation caught the world’s attention, and in 1986, Israel supplied the US Navy with its first drone, known as the Pioneer. A few years later, one Pioneer made history when it ﬂew over a group of Iraqi soldiers during the First Gulf War. The soldiers saw the aircraft, took off their white undershirts and waved them in the air. It was the first time in history that a military unit had surrendered to a robot.

Israel’s drones have revolutionized the modern battlefield. They cost a fraction of a manned fighter jet — some as little as a few million dollars — and participate today in every single operation conducted by the IDF.

Drones give soldiers the ability to make calculated decisions before invading territory or storming enemy compounds.

Before Israel bombs a building in the Gaza Strip, for example, it always has a drone in the air to ensure that civilians are not inside. They also reportedly fly almost daily over Lebanon, tracking fighters for Hezbollah, which is believed to have about 130,000 missiles capable of striking Israel.

To this day, the Merkava tank is one of Israel’s most top-secret projects. It is said to be one of the most lethal and protected tanks in the world, and its construction started out of pure necessity — the United Kingdom and other countries refused to sell Israel tanks. So in the 1970s, it started to build its own.

A Merkava tank during a drill with IDF soldiers in northern Israel. Photo: IDF Spokesperson’s Unit

The newest model — known as the Merkava Mk-4 — is the most impressive. It can reach speeds of 40 mph and comes with a new modular armor kit, meaning that the tank can be ﬁtted with the armor it needs based on the speciﬁc mission it is heading into.

An area, for example, known to be full of anti-tank missile squads requires heavy armor, while an operation without the threat of anti-tank missiles means less. This also allows tank crews to replace damaged pieces of armor on the battleﬁeld without having to bring the full tank back to a repair shop inside Israel.

In 2012, the Merkava underwent its biggest change yet when a new system — called Trophy — was installed on the tank. Trophy is an active-protection system, basically a personal missile defense system for an individual tank.

Trophy uses a miniature radar to detect incoming anti-tank missiles and then ﬁres a cloud of countermeasures — basically metal pellets — to intercept them. The radar also interfaces with the tank’s battle management system. This means that once a missile launch is detected, the coordinates of the enemy squad that ﬁred the missile are immediately obtained, allowing the tank to retaliate quickly and accurately.

Yaakov Katz is the co-author of “The Weapon Wizards: How Israel Became a High-Tech Military Superpower” and editor-in-chief of The Jerusalem Post.