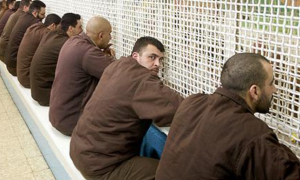 Security prisoners convicted of murder or accessory to murder who have served 2/3 of their sentences will no longer be eligible for parole under new law passed Tuesday that prevents their early release.

By Ariel Kahana and Gideon Allon

The Knesset on Tuesday enacted a law preventing the early release of security prisoners found guilty of murder or accessory to murder under the 2016 Anti-Terrorism Law.

According to the new law, sponsored by Yisrael Beytenu MK Oded Forer and Likud MK Anat Berko, prisoners convicted of murder or accessory to murder will no longer have the possibility of having their sentences shortened.

In addition, the Israel Prison Service Parole Board ‎will not be able to authorize the release of security prisoners, even if they have served two-thirds of their sentence.

With elections announced for April 9 and the government set to introduce a bill calling for the Knesset’s dissolution on Wednesday, Forer said, “We have increased deterrence and prevented the exacerbation of the early release of terrorists. We are truly, at the last minute, succeeding in getting justice for the families who lost their loved ones in terrorist attacks.”