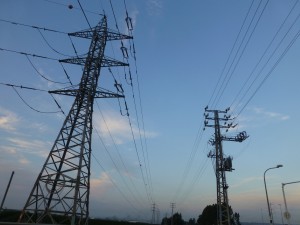 Beginning Thursday, Israel Electric Corp will reduce the power supply to Jericho due to the Palestinian Authority’s more than 1.7 billion shekels of unpaid electric bills.

Israel’s state-run electricity company was set Thursday to reduce the power supply one of the Palestinian Authority’s major cities over a debt of $450 million, an Israeli official said.

The debt currently amounts to more than 1.7 billion shekels ($450 million), according to the energy industry official who spoke on condition of anonymity.

“We’ve informed all the relevant parties, and after endless attempts to reach arrangements, we’ve decided to act to reduce the debt,” the official said, adding that the Jericho move was “open-ended.”

In January 2015, the IEC cut the power to PA cities for a number of hours every day over a similar debt. It ceased doing so, however, the following month despite the standing debt after the US State Department criticized the move.

The Israeli Finance Ministry and Prime Minister’s office, which would normally be involved in any decision to reduce the electricity to the Palestinian Authority, did not immediately respond to requests for comment.

Some Israeli leaders have suggested using PA tax money collected by Israel to pay off the massive debt.

In 2015, then Energy and Water Minister Silvan Shalom demanded Israel take steps to ensure that Israelis were not left with the PA’s bill.