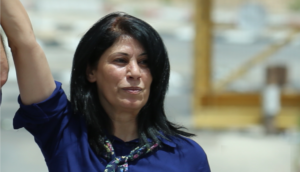 Having served 15 months after conviction for inciting violence and “promoting terrorist activities,” back in 2015, Khalida Jarrar, a senior member of the Popular Front for the Liberation of Palestine, was released again, this time after having been held under administrative detention since July 2017.

The family of a Palestinian Authority lawmaker said Israeli authorities have released Khalida Jarrar after 20 months of holding her in detention without raising charges.

The lawmaker’s husband, Ghassan Jarrar, said she was freed on Thursday.

The 56-year-old Khalida Jarrar was held under administrative detention, an Israeli policy that permits holding people for months at a time without charges.

Senior member of the Popular Front for the Liberation of Palestine and PA parliamentarian Khalida Jarrar with Israeli Arab parliamentarian Ayman Odeh, Head of the Joint List, after the Israeli authorities released her in 2016. – Photo: Zaher333/Wikimedia

In 2015, she served 15 months after being convicted of incitement to violence and “promoting terror activities.”

A senior member of the Popular Front for the Liberation of Palestine, she was arrested again in July 2017 and held since then. She was initially scheduled to be released last October but her detention was then extended another four months.

Since her detention began, the PA parliament has been dissolved due to internal strife.