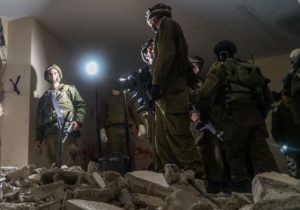 By Elior Levy and Itay Blumental

The IDF and the Shin Bet arrested overnight Tuesday a Hamas legislator in the West Bank parliament, Ahmed Atun, who resides in the city of Al-Bireh, north of Jerusalem. Two other wanted individuals in the West Bank were also arrested in the process.

Atun is one of four Hamas members of parliament who were stripped of their residency in east Jerusalem and expelled in the last decade, the others being Muhammad Abu Tir, Khaled Abu Arafeh, and Muhammad Totah.

Atun was provided sanctuary in the Red Cross headquarters located in Jerusalem for a year until he was captured in 2011 at the entrance by the police.

His brother was sentenced to a life sentence for the murder of three Israelis and was released under the provisions of the Shalit deal in which more than 1,000 Palestinian prisoners were surrendered in exchange for the handing over of IDF soldier Gilad Shalit in 2011, who had been in Hamas captivity for 1941 days.

Two days ago, the IDF also arrested Ma’an Fukha, the brother of the Hamas military senior official Mazan Fukha, who was recently assassinated in the Gaza Strip.

Ma’an, who lives in the West Bank city of Tubas, east of Nablus, was arrested while on his way to work. In addition, another brother was arrested for his alleged membership in a Hamas military cell.

With the identity of Mazan Fukha’s killers still eluding the Hamas rulers in the strip, security forces remain in an almost helpless state of confusion, fumbling their way through the investigation, desperately overturning any rock that could shed light on the matter, and frantically attempting to save face by executing so-called Israel collaborators.

On Monday, Hamas security officials arrested a man who allegedly claimed to have carried out the hit. His identify has yet to be publicized.

As far as investigators are aware, the events leading to Fukha’s death transpired thus: He arrived in the late hours in his vehicle to his home in the neighborhood of Tel al-Hawa with his wife and children.

When Fukah dropped them off as he drove his car to the building’s underground parking lot, that was the last time they saw him alive as his assassins were awaiting his arrival. Homing in on their target, they fired four shots at close range into his head and immediately fled the scene.