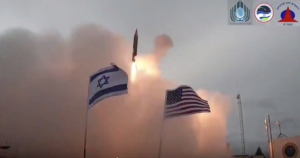 Washington said last week that Iran appeared to have tested a medium-range ballistic missile that flew about 1,000 km (620 miles). Tehran said such tests were for defensive needs, not aimed at any country.

“Today Israel has the ability to act against ballistic missiles that could be launched against us from Iran or anywhere else,” said the prime minister. “This is a great achievement for the security of Israel.

“All of our enemies should know that we will overcome them in both defense and offense.”

The U.S. ambassador to Israel, David Friedman, attended Sunday’s meeting of Netanyahu’s cabinet, where he and the ministers watched a video of an Alaska missile interception.

During three recent tests in Alaska, the Arrow 3 intercepted ballistic missiles beyond the atmosphere at unprecedented altitudes and speeds. Perfect execution! I would like to express my deep and strong appreciation to the United States for advancing our joint security. 🇮🇱🇺🇸 pic.twitter.com/HTFnYFXGIs

The Ministry of Defense said that, as part of the Alaska tests, Arrow-3 was successfully synched up with the AN-TPY2 radar – also known as X-band – which provides the United States with extensive global coverage. Israel hosts an X-band battery.

The U.S. Missile Defense Agency said that Arrow 3’s interception of a missile outside the atmosphere is a “major milestone” in its development.

“We are committed to assisting the government of Israel in upgrading its national missile defense capability to defend the state of Israel and deployed U.S. forces from emerging threats,” Vice Admiral John Hill, director of the Pentagon’s Missile Defence Agency, said in a statement.

Arrow 3, along with the Iron Dome, David’s Sling, and the Arrow 2 systems, is part of the multi-layered shield Israel is developing to defend against rockets fired from Gaza and Lebanon, as well as Iran’s long-range missiles.

Jointly manufactured by Boeing Co, Arrow-3 is billed as capable of destroying missiles in space, an altitude that would destroy any non-conventional warheads safely.

It passed the first full interception test over the Mediterranean Sea in 2015 and was deployed in Israel in 2017.