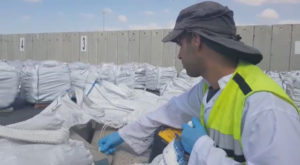 Since the new joint project between Israel’s Crossing Authority, Shin Bet & Israel Police, the lab has identified substances which could be weaponized, literally preventing tons of explosive materials from reaching the Palestinian terror organizations in Gaza.

An attempt to smuggle tons of explosive material into the Gaza Strip has been thwarted by the Israeli Ministry of Defense’s Crossing Authority, it was announced on Wednesday.

The attempt was foiled thanks to a new, advanced chemistry laboratory that was set up in recent weeks at Israel’s Kerem Shalom crossing with Gaza.

New security lab identifies chemicals and other dangerous materials before they are transferred to Gaza. – Photo: DEFENSE MINISTRY SPOKESPERSON’S UNIT

The new laboratory is a joint project of the Ministry of Defense’s Crossing Authority, Shin Bet (Israel Security Agency) and Israel Police.

Advanced technology permits experts to precisely identify gases, liquids, powders, metals and other substances before they enter the Gaza Strip. The primary focus is to prevent substances which could benefit terror groups in the enclave.

During the laboratory’s initial trial period, a truck transporting motor oil raised the suspicions of the border crossing’s security inspectors.

Chemical testing subsequently revealed that the supposed vehicle oil was actually a dangerous substance, destined to assist the production of large quantities of explosive material by terror groups in the Gaza Strip.

“The establishment of the laboratory greatly widens the security forces’ toolkit in the daily, relentless battle against smuggling into the Gaza Strip,” said Abu Rukun.

“The laboratory’s abilities will join our already large identification system which includes a range of tools, the most important of which is the human element – the crossing inspectors,” he added.

“With skilled work we are able to identify every forbidden substance that could strengthen terror groups in the Strip.”

New lab identifies chemicals and other dangerous materials before they are transferred to Gaza. – Photo: DEFENSE MINISTRY SPOKESPERSON’S UNIT

In October, authorities at the same crossing thwarted an attempt to smuggle thousands of military boots to Hamas’s military wing in Gaza. The boots were concealed inside large slippers.

The Coordinator of Government Activities in the Territories said it foiled 1,226 smuggling attempts through the Kerem Shalom crossing in 2016, an increase of 165% from the previous year.

On November 1, Hamas ceded control of the Gaza Strip’s border crossings with Israel and Egypt to the Palestinian Authority. The move followed the conclusion of a reconciliation deal between the rival Palestinian factions.