Israeli Citizens Trust Arab Doctors, So, Why Not The Arab Politicians? 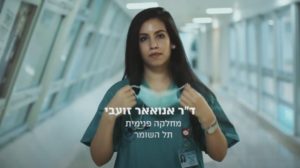 Mixing Apples & Oranges: An Israeli left-wing campaign video focuses on the unquestioned trust by all of Israel with their Arab health officials, in virtually all levels in every hospital throughout Israel, but conveniently ignores the real issues at hand about their political leaders, some of whom have applauded, even assisted terrorists.

A viral video campaign is asking Israeli Jews to trust their Arab countrymen in politics the same as they trust them in health care.

The “Partners in Fate; Partners in Government” video has been viewed nearly 2 million times in Hebrew. The 55-second clip features a series of Israeli Arab doctors and nurses, noting that they, alongside their Jewish colleagues, have won the praise of the entire nation during the battle against the coronavirus.

The campaign’s creators insist that if Israelis are willing to put their lives in the hands of Arabs when it comes to their health, then they must also be willing to partner together in the governance of the State of Israel.

The video is a clear response to what we saw during the last three election campaigns, in which the leading Jewish political parties repeatedly warned of the dangers of allying with the Knesset’s only Arab-majority faction, the Joint Arab List.

Joint List Knesset Member Jamal Zahalka,  leader of the Balad party between 2007-2019 was admonished by the Israeli President for his condolence call to the family of a killed terrorist. – Photo: Wikimedia

But the video makes the same erroneous assumption, if not slanderous charge as most left-wing campaigns of its type. The majority of Israeli Jews are not racist against their Arab countrymen, as evidenced by the coexistence and cooperation that exists in the health care system and the fact that the vast majority of Israeli Arabs enjoy a sense of belonging in Israel.

Members of the Joint Arab List have routinely identified with the Palestinian nationalist cause, some going so far as to justify Palestinian terrorism against Israeli Jews. They have also repeatedly accused Israel of being an apartheid state, although that charge is entirely debunked by the leftist video campaign in question. In a truly apartheid state, Arabs would not be part of the health care system.

The notion behind the video is a nice one. What its creators got wrong is that the level of coexistence and cooperation they envision already exists. But willingness to let Arabs participate in government doesn’t mean opening our arms to a political party that has as one of its stated goals the purging of the Jewish character of the State of Israel.