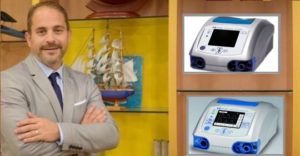 CEO of the company’s Israel division, Yaron Yitzhari says, “the financial impact has negligible weight, because the main thing is saving lives, and that’s what our company knows how to do.”

Medtronic, the world’s largest manufacturer of medical equipment, is currently receiving large amounts of attention for its ventilator. This week, the CEO of the company’s Israel division, Yaron Yitzhari, made the decision to release all of Medtronic’s patents for the production of ventilators, in order to enable any company wishing to manufacture them to use Medtronic’s blueprints, for free.

Arutz Sheva spoke with CEO Yitzhari, asking him about his decision and the possible repercussions for the company.

“We didn’t just release the patents,” he clarifies. “We’ve made available all the details of the manufacturing process, for anyone who’s interested in manufacturing ventilators himself.”

The Medtronic Puritan Bennett 560 is a tried and tested ventilator, which has been in active medical use for nearly a full decade now. – Medtronic

Wasn’t he concerned about the potential loss of profit for his company, almost certain to run to the millions of dollars?

“In the present situation, I’m proud to work at Medtronic,” he replies. “Our goal is to prolong lives – to save lives, in fact. This is what’s needed right now, in the emergency situation we’re in, and this consideration comes before everything else. These are unusual times, and they demand of us to act in unusual ways. So, when it comes to calculating the financial impact, it has negligible weight, because the main thing is saving lives, and that’s what our company knows how to do.”

Could his company have met the increased demand for ventilators?

“There’s been a massive increase in demand for ventilators from all over the world, addressed to every single company that knows how to make them, as well as some that don’t yet know how. We’re talking about a demand for literally hundreds of thousands of machines, when global production usually runs to maybe a few thousand a month. So we, at Medtronic, decided to do three things. First, we increased our own production capacity; we doubled it already, and will triple it in the coming weeks. We also partnered with a vehicle manufacturer in order to increase our production levels. The decision to release our patents and details of the manufacturing process was our third response to the current crisis.”

Even so, surely this could end up being a fatal move for his company that will have repercussions extending beyond the end of the current crisis?

Yitzhari dismisses the concerns. “We employ ninety thousand workers in various locations around the world, and our company manufacturers thousands of products. Ventilators are just one of those products, and this is an emergency situation. We have many other products that we sell for profit.”

He adds that even though he opened the field to his competitors, that doesn’t mean that Medtronic won’t remain in the overall picture. Most medical personnel need training in how to operate the machines, and his company will be providing that training.

“We’re sending people into the hospitals to train staff in operating the machines,” he says. “Of course, that introduces an element of risk too. Just yesterday I was told about two members of our staff who had gone into isolation [because of feared exposure to the coronavirus]. We’re running this project like a war room, not only on the production lines but also with our staff.”

Arutz Sheva also asked Yitzhari if he wasn’t concerned that other companies could take his blueprints and cut corners in the manufacturing process, in order to save money – and potentially endanger lives.

“We haven’t made our information available to just anyone,” he reassures us. “Companies who use our know-how register with us, and we oversee the process and do quality control too. I’d like to add that any hospital or clinic that has old Medtronic ventilators in storage because they need to be serviced should bring them to one of Medtronic’s labs, and we’ll service the machines for free. In the last few weeks we fixed about twenty machines, and I hope people will bring more.”

What kind of reactions has he had to the decision to give away trade secrets to his competitors?

“It’s been amazing,” he says. “But what’s most important to me is how our own staff feel about this, and the overwhelming reaction has been one of great pride. Our staff are proud to be working for Medtronic, and I am too.”