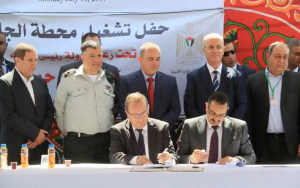 As part of the deal, a new electrical substation was inaugurated near Jenin on Monday. The facility will transmit 60 megawatts of electricity purchased from the Israel Electric Corporation, officials said.

“This is definitely an encouraging historic moment, in which we are inaugurating the first substation in the Palestinian Authority,” Steinitz said at the ceremony.

Palestinian cities in Judea and Samaria is dependent on Israeli electricity, and the internationally funded substation is one of four that will be operated in the area by a Palestinian Authority-owned transmission company.

The power boost for the West Bank coincides with an energy crisis in the Gaza Strip, where electricity flows only two to three hours a day, and medical facilities and residents who can afford to buy fuel largely rely on generators.

Since last month, the IEC has reduced the amount of power it supplies Gaza by nearly half after the PA slashed its payments to the company for the electricity.

The Palestinian Authority argued that Hamas, which violently seized control of the enclave in 2007, was not reimbursing it for the cost. Palestinian political analysts and Hamas said the PA generated an energy crisis to pressure Hamas into loosening its grip on Gaza.