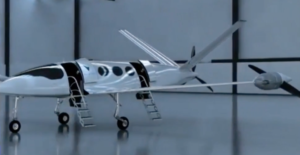 Operating at a fraction the cost of conventional airliners, the $4 million ‘Alice’ will redefine how people travel regionally, flying at 273 mph for up to 621 miles on one battery charge, a new era of flying begins now, that is quieter, cleaner, and far more cost-effective.

The Alice, which can seat nine passengers and two pilots, can fly at 273 miles per hour for up to 621 miles on one battery charge, at a cost of $200 per hour of flight. The battery comprises 65% of the plane’s weight. The plane’s unusual and modern look, which Eviation CEO Omar Bar-Yohay described as “whale-shaped,” is due to its aerodynamic efficiency.

Eviation already has orders for a “double-digit” number of airplanes from US regional carrier Cape Air, with which Eviation signed its first deal. Each plane will carry a $4 million price tag.

“Operating at a fraction of the costs of conventional jetliners, our Alice will redefine how people travel regionally and usher in a new era of flying that is quieter, cleaner, and cost-effective,” Bar-Yohay said.

Israeli startup Eviation unveils an electric plane able to take nine people over 600 hundred miles on a single charge at the #ParisAirShow pic.twitter.com/OTXIpWGihg

The use of electric planes, especially if they “take off” and become widespread is a step in the right direction to a cleaner environment, as the high carbon emissions from standard planes have been a source of concern for environmentalists. Electric planes can also potentially decrease the high costs of plane travel due to the huge amount of oil planes require.

Bar-Yohay, speaking at a press conference at the Paris Air Show on Tuesday, said that the Alice will undergo flight-tests this year and will then be tested for certification by the American Federal Aviation Administration (FAA). The company is expecting Alice to be ready for commercial use by 2022.