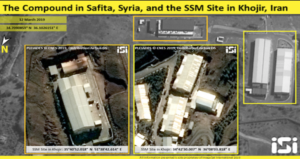 Satellite photographs analyzed by Israel’s intelligence firm ISI appear to indicate that Tehran is once again constructing a new advanced missiles factory in Syria, based on patterns similar to missile sites in Iran.

Satellite images taken by Israeli intelligence firm ISI on Tuesday seem to confirm suspicions that a missile factory is being constructed in the Syrian town of Safita, east of Tartus on the Mediterranean coast.

The images show a secured site surrounded by a fence, vehicles, three hangars and a newly built water tower. “The building components and patterns of activity in and around the compound strengthen the probability that this is a missile manufacturing plant,” ISI’s intelligence report said. It is however not possible to determine with certainty whether this is an Iranian site.

According to the report, buses and private vehicles were identified in recent months at the entrance to the suspect site, east of the port city of Tartus.

The workers at the site come and go in patters consistent with military installations. The water tower, clearly discernible in the images, indicates that it was built only recently.

These findings prove that the compound is already active and is in development stages. However, it appears that the site does not produce missile engines and warheads, since no protected structures were identified in the compound. The same building patterns seen at the site, according to the report, are also seen in other sites with an identical purpose, such as the missile manufacturing plant in the city of Khojir in Iran.

The compound contains three main hangars, which resemble large industrial structures. It is possible that two of them are used for production lines and the third is intended for the assembly of the missiles.

In a dirt area about 500 meters from the site, ISI intelligence personnel identified marks on the ground, apparently created by heavy vehicles. “In our assessment, the tire prints are not related to the activity of quarries operating in the area,” it says.

Fox News reported in October that western intelligence agencies believe that Iran transferred to Hezbollah technology to improve the precision of missiles, a matter which Israel views gravely.