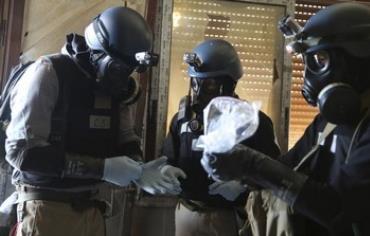 The source said he could confirm claims made by Syrian rebels and doctors last month, that a substance was used on rebel fighters in Harasta, an outlying region of the Syrian capital, adding that the chemical “neutralizes but does not kill.” A second alleged use of chemical weapons by the Assad regime occurred in the same area within days of the first attack, according to Syrian opposition sources, though the security source said he could not confirm that additional report.

According to the New York-based website Syria Deeply, which interviewed doctors on the ground in Syria, in one instance, 25 fighters were injured. Despite the assertion by the security source that the chemical is non-lethal, some reports suggested that four people were killed in the March 27 attack.

The Syria Deeply website cited the Syrian American Medical Society (SAMS), a group of Syrian-American doctors and surgeons traveling in and out of Syria, as condemning what it described as a “poisonous gas attack” in Harasta.

“Symptoms suffered by patients included hallucination, accelerated pulse, trouble breathing and, in some cases, suffocation,” according to SAMS.

According to Israeli security assessments, Syria has destroyed the majority of its chemical weapons production centers, and is in the midst of transporting chemical weapons from storage sites to ships in Latakia which remove the substances and destroy them. The disarmament efforts, which have been stepped up in recent weeks, are being managed by the Organization for the Prohibition of Chemical Weapons.

Israel is expected to closely monitor the situation to try and see whether Assad attempts to secretly keep some chemical weapons .

Prior to the disarmament program, Syria had amassed the world’s largest stockpile of VX nerve agents, Sarin, and mustard gas.

In August 2013, a chemical attack on a rebel area north of Damascus left 1400 civilians dead. The massacre led to a Russian-brokered disarmament agreement that saw Assad agree to give up the unconventional arms in exchange for avoiding a US military strike.