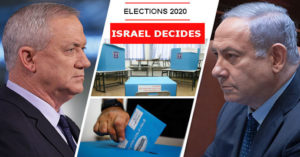 Israel’s highest turnout in the past 21 years seems to have worked for PM Netanyahu, as he finally claims right to form a government in Israel’s third national election in less than a year.
– Three exit polls reflect Gantz’s Blue & White party losing significant supporters to Netanyahu’s ruling Likud party.

Voting in Israel’s Election Day ended at 10pm Tuesday with the three main television exit polls predicting that Prime Minister Benjamin Netanyahu’s Likud party will likely claim significantly more seats than Benny Gantz’s Blue & White party with the right-wing bloc appears to be only one short of a parliamentary majority.

If final results give Netanyahu a parliamentary majority, it would pave the way for a new term and give him a boost as he prepares to go on trial for corruption charges.

Although official results are expected to come in throughout the night, Netanyahu was quick to claim victory by tweeting “Thank you,” on his social media page, accompanied by a heart emoji.

Gantz, meanwhile, vowed to “keep fighting” for all the voters who backed him in the Israeli elections. “Thank you to the thousands of activists and more than million voters who chose Blue and White,” Gantz said on Twitter, refering to his party. “I will continue to fight for the right path, for you.”

Avigdor Liberman’s Yisrael Beytenu party, which was a kingmaker in the last election round winning 10 seats, has this time around seen its vote peter out mustering somewhere between eight to six Knesset seats. Despite the disappointing result, Liberman remained defiant in his speech, vowing his party will do anything for there not to be a fourth election campaign.

“We will not neglect the guidelines that we have been talking about, even now that we are expected to get eight seats, maybe even less,” said Yisrael Beytenu MK Oded Forer. “Our ambition is for there to be a national and liberal government, which most of the public wants.”

The Arab Joint List political alliance, however, said the they were left disappointed with the projected 14 seats they are set to get. “This failure is all Blue & White’s, who should draw conclusions from their treatment of the Arab public and their statements about a ‘Jewish majority’,” Joint List co-founder Ahmad Tibi said after the poll results were revealed. “Racism didn’t work this time around. Equality is the way.”

The religious and ultra-Orthodox parties made a strong showing, each getting between nine and seven seats and easing fears that a triumph for Likud would come at the expense of lesser right-wing parties.

During jubilant celebrations at Shas headquarters, the party’s leader Aryeh Deri thanked his voter base for mobilizing.

MK Orly Levy, one of the co-heads of Labor-Gesher-Meretz alliance, which according to the exit polls barely edged past the electoral threshold with six seats, was the first one from the center-left bloc to issue a statement shortly after the exit polls were revealed.
“You have proven that you care and that you are ready to act on the issues that matter to you. Thank you for voting for us,” Levy said.

Associated Press and Reuters contributed to this report