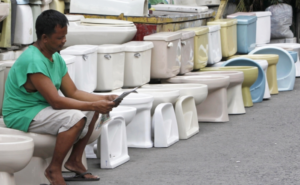 Just in time for World Toilet Day (November 19), Ben-Gurion University of the Negev publicized results of a pilot study demonstrating that raw human excrement potentially can be converted into a safe, reusable fuel and nutrient-rich fertilizer.

According to the groundbreaking study published recently in the Journal of Cleaner Production, researchers at the Ben-Gurion University Zuckerberg Institute for Water Research refined a process using hydrothermal carbonization (HTC) to heat solid human waste in a special “pressure cooker” to create hydrochar, a safe, reusable biomass fuel resembling charcoal.

The Gates Foundation launched the Reinvent the Toilet Challenge in 2011 to accelerate the commercialization and adoption of disruptive off-grid sanitation technologies. Earlier this month, the foundation sponsored a Reinvented Toilet Expo in Beijing.

Sterile and safe to handle

In the pilot and laboratory study, the BGU researchers subjected the raw waste material through HTC at three temperatures (180, 210 and 240 °C) and reaction times (30, 60 and 120 minutes).

The solids become dehydrated, creating a substance known as hydrochar, a combustible solid, as well as a nutrient-rich aqueous (liquid) phase that could be used as crop fertilizer.

The researchers, including doctoral candidates Reut Yahav Spitzer and Vivian Mau, stressed that the reaction that creates the hydrochars sterilizes the waste material, so it becomes safe to handle. The “coals” potentially can be utilized for household heating and cooking.

“While it is rich in organic matter and nutrients such as nitrogen, phosphorus and potassium, human waste also contains micro pollutants from pharmaceuticals, which can lead to environmental problems if not disposed or re-used properly.”

Energy scarcity is also a challenge in many parts of the world. Approximately two billion people worldwide use solid biomass, especially wood converted into charcoal, for cooking and heating. But burning charcoal leads to air pollution, greenhouse gas emissions, deforestation and soil erosion.

“By treating human waste properly, we can address both of these issues at once,” Gross said.

The study was funded by the Rosenzweig-Coopersmith Foundation and the Israel Water Authority.

The BGU Zuckerberg Institute for Water Research, named for New York philanthropist Roy J. Zuckerberg, conducts interdisciplinary research and graduate education in water sciences within the Jacob Blaustein Institutes for Desert Research at the Sde Boqer Campus of Ben-Gurion University of the Negev.

Abigail Klein Leichman is a writer and associate editor at ISRAEL21c. Prior to moving to Israel in 2007, she was a specialty writer and copy editor at a major daily newspaper in New Jersey and has freelanced for a variety of newspapers and periodicals since 1984.