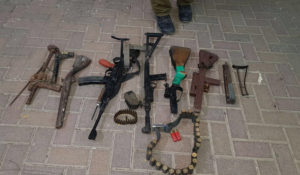 Translation: A father photographed his son, a 5-month-old baby playing with a loaded gun in his bed. The father, a resident of Umm al-Fahm, was arrested and an indictment was filed against him for theft of the weapon and child-endangerment. (Orly Alcalay)

Since the beginning of the year, approximately 3,350 Arabs have been arrested in Israel in connection with illegal possession of firearms, arms trafficking and smuggling and shootings.

Compared to last year, there is an increase of 21 percent in the total number of illegal weapons, but the relationship between the Arab and other sectors has not changed much.

Yesterday, a video that made headlines showed a one-year-old baby with a loaded gun. The baby’s father, a resident of the city Umm el-Fahm, was arrested. He claimed the weapon didn’t work. Later, however, it turned out that the gun had been stolen from a security officer in Tel Aviv.

The father was charged with theft and child-endangerment.