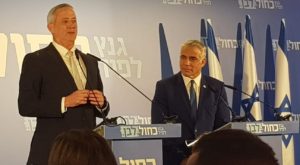 (JNS) It is almost impossible to grasp the danger of Israel’s present moment.

A month before the Knesset elections, the caretaker government led by Prime Minister Yair Lapid and Defense Minister Benny Gantz is moving full speed ahead with a maritime agreement with an enemy state that it insists will obligate Israel in perpetuity. The Exclusive Economic Zone (EEZ) agreement Israel is concluding with Hezbollah-controlled Lebanon will fundamentally alter Israel’s maritime borders, deny the Jewish state tens of billions of dollars, which will go instead to a government controlled by Iran’s Lebanese foreign legion, Hezbollah, and transform Hezbollah and Iran into actors in the eastern Mediterranean.

The deal in question has been under negotiation for more than a decade.

In 2010, as the natural gas deposits in the eastern Mediterranean were being rapidly explored and developed by Israel, Cyprus, Greece and Egypt, Israel signed agreements with its neighbors to delineate the boundaries of each state’s EEZ. Since Israel and Lebanon are enemy states, Israel did not negotiate an agreement with Lebanon. Lebanon did however negotiate an agreement with Cyprus, as part of which it drew a line delineating the southern boundary of its maritime waters. 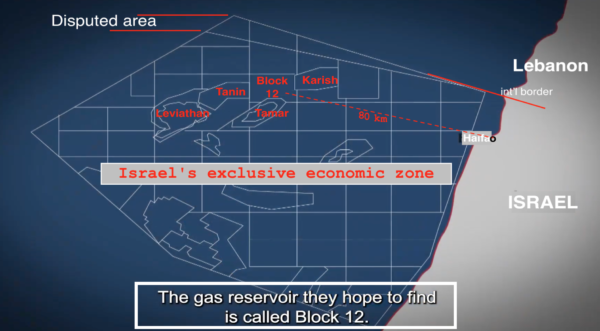 Israel accepted the Lebanese line and submitted its maritime economic zone borders to the United Nations on the basis of the Lebanese/Cypriot agreement and the bilateral agreement it had concluded with Cyprus.

Given that Hezbollah rejects Israel’s right to exist, Hezbollah-controlled Lebanon surprised no one when it immediately objected to Israel’s map, even though it was based on Lebanon’s own demarcation.

Lebanon demanded 854 square kilometers of Mediterranean waters that formally belonged to Israel. The Lebanese demand included complete control over the massive Qana natural gas field, much of which extends into Israel’s waters. Fred Hoff, who served at the time as the Obama administration’s point man for the eastern Mediterranean, offered a compromise deal which would have given around 55 percent of the area to Lebanon and left 45 percent under Israeli sovereignty.

Hezbollah-controlled Lebanon rejected the deal, and there the negotiations stood, more or less, until last July.

In the meantime, Israel began developing the Karish gas field, which by all accounts is located in its EEZ. Karish was scheduled to go online last month, but in July, Hezbollah boss Hassan Nasrallah threatened to attack Karish if Israel began production before reaching a deal with Lebanon. Hezbollah then attacked Karish with four drones, which were intercepted by the Israel Defense Forces.

Rather than retaliate for Hezbollah’s aggression, fearful of Hezbollah, Israel delayed the start of work at Karish, and Biden administration envoy Amos Hochstein swooped into action. As Lebanon expert Tony Badran from the Foundation for Defense of Democracy has copiously documented, the Biden administration is dead set on giving as much money as possible to Lebanon—with full knowledge that money to Lebanon is money to Hezbollah. The administration’s desire to enrich a state dominated by Hezbollah/Iran stems from what Badran and the Hudson Institute’s Michael Doran described in May 2021 as its overarching goal of realigning the United States away from its traditional allies—Israel and the Sunni states—and towards Iran.

A deal with the US, not Lebanon

During his visit to Israel in July, just days after Hezbollah’s drone attacks on Karish, Biden upped US pressure on Israel to conclude a deal with Lebanon and so enable the Hezbollah-controlled Lebanese government to begin raking in billions of dollars in gas revenues from the Qana field. US pressure only increased since then.

Rather than stand up to the administration and oppose a deal that empowers Hezbollah both economically and strategically at Israel’s expense, the Lapid-Gantz government caved. As head of the caretaker government, Lapid, and his partisan subordinate Energy Minister Karine Elharar began marathon US-mediated negotiations with Hezbollah-controlled Lebanese negotiators over the maritime boundary. Gantz compelled the IDF to support the deal and present his capitulation to Hezbollah extortion as a massive strategic achievement that strengthens Israel’s deterrent edge over Hezbollah.

Perhaps the most extraordinary aspect of the deal is that it doesn’t obligate Lebanon. Israel’s deal is with the United States, not Lebanon. And judging by Nasrallah’s statements, Hezbollah views it as a starting point, not an ending point.

During the course of the negotiations, the Lebanese negotiators suddenly presented a new, even more expansive territorial demand. Lebanon, they said, is the rightful owner of more than the disputed 854 km of Israeli waters. It is also the rightful owner of large swaths of the Karish gas field. Hochstein reportedly used the ploy, along with Nasrallah’s extortionate demands, to compel Lapid and Gantz to agree to give up a hundred percent of the disputed waters. But now that Lebanon has already tipped its hat to its next demand, and given that Lebanon is not obliged by the boundary line Israel has accepted, it’s obvious that Lebanon will disavow the deal at a time of Hezbollah’s choosing.

Lapid, Gantz and their allies portray the deal as a diplomatic and strategic masterstroke. By surrendering to all of Hezbollah-controlled Lebanon’s 12-year-old demands, they brag that Israel has secured its ability to develop Karish. In other words, they’re bragging that they’re signing a protection deal with Hezbollah. In exchange for 854 square kilometers of sovereign Israeli waters, they believe that Hezbollah will permit us to exploit our natural resources—at least until Nasrallah decides to renew his threats and demands.

Aside from the Israeli media, no one has been buying their line.

We spent years trying to broker a deal between Israel and Lebanon on the disputed maritime gas fields. Got very close with proposed splits of 55-60% for Lebanon and 45-40% for Israel. No one then imagined 100% to Lebanon and 0% to Israel. Would love to understand how we got here.

Former prime minister Benjamin Netanyahu noted at a press conference on Monday that whereas he held the line against Hezbollah for a decade, Lapid folded after only three months.

See: “Israel Has Surrendered to Hezbollah!”

To try to present their agreement as something other than capitulation to Hezbollah’s extortion, Lapid and Gantz are claiming the deal is the key to a Lebanon free of terrorist influence. This claim is weird on its face. After all, they insist that the Lebanon they are negotiating with is an independent entity not controlled by Hezbollah. And at the same time, they say Lebanon needs tens of billions of dollars from gas proceeds from Qana to free itself of Hezbollah control.

And that isn’t the only absurdity in their claim. Lebanon’s financial dealings are both controlled by Hezbollah and entirely opaque. Hezbollah can be trusted to take as much of the gas proceeds as it sees fit and leave the Lebanese with the crumbs at the bottom of its plate.

In his press conference Monday, Netanyahu said that the deal will not obligate a government under his leadership because it is “illegal.” And he is right. Under Israel’s 2013 Basic Law on territorial concessions, the government is required to present all agreements involving the relinquishment of Israeli territory to the Knesset for approval. To take legal effect, an agreement requires either the support of two thirds of the Knesset or the majority of the public in a referendum. Contrary to the basic law, Lapid and Gantz are refusing to bring the deal before the Knesset for approval.

And with the support of Attorney General Gali Baharav-Miara, they insist that since the agreement is about economic waters, it isn’t about territory and therefore doesn’t require Knesset approval. Baharav-Miara initially said that all that is required is for the Security Cabinet to approve the deal. That it doesn’t even have to be made available to the Knesset for perusal—let alone approval.

Under public pressure, she updated her position Sunday and announced that the deal has to be approved by the full government and submitted to—but not approved—by the Knesset. This too is a mile short of the requirements of the law. Baharav-Miara’s behavior is also a harsh commentary on the corrupted, politicized state of Israel’s legal fraternity.

It was her predecessor Avichai Mandelblit who insisted that caretaker governments may not carry out any non-essential functions or initiate policies that will obligate a successor government. On the basis of his dictate, Mandelblit barred Netanyahu’s caretaker government from appointing an acting state prosecutor. Obviously, the Lapid-Gantz surrender deal to Lebanon’s Hezbollah-controlled government falls within the Mandelblit’s criteria for prohibited actions.

Baharav-Miara’s behavior demonstrates that as far as Israel’s politicized legal fraternity is concerned, there are two laws governing the state—one for the left, and one for the right. For the left, everything is permitted. For the right, nothing is. In other words, as far as the legal fraternity is concerned, Israel is governed by its leftist government lawyers, not by the rule of law.

This brings us to the media.

In light of the strategic and economic implications of the deal, if Israel had a functioning media, journalists could have been expected to provide critical coverage of the agreement and carry out an informed debate. After all, that’s the purpose of the Fourth Estate. But rather than do its job, in a demonstration of its own political bias and corruption, with a few notable exceptions, Israel’s liberal media have done next to no due diligence in their reporting of the agreement. Instead, they have parroted the Lapid-Gantz government’s talking points one after the other.

The only Hebrew-language media outlet that has subjected the radical surrender agreement to significant scrutiny has been Israel’s new conservative outlet Channel 14. Last week, Lapid petitioned the Central Elections Commission to shutter Channel 14, which, he insists, is opposition propaganda because it doesn’t provide him with enough positive coverage.

I am deeply troubled that Biden officials pressured our Israeli allies to hand over their territory to the Iran-controlled terrorist group Hezbollah. Another topic for the next Republican Congress to investigate. https://t.co/6upZLxMSlp

Cruz indicated that if the Republicans win control of Congress in next month’s elections, they will conduct a formal investigation of the administration’s actions. As Cruz put it, the deal is “another topic for the next Republican Congress to investigate.”

On Monday night, Globes reported that until a few weeks ago, Israel’s position was that it would retain a third of the disputed waters and its rights to the Qana gas field. But then, at a fateful meeting in the Defense Ministry, Gantz and Lapid’s representative, National Security Adviser Eyal Hulata, abandoned Israel’s long held stand and agreed to give up all of the disputed waters and Israel’s economic rights to Qana. Israel’s chief negotiator, Udi Adiri, vociferously rejected the capitulation and resigned in protest. Hulata was installed as the new head of Israel’s team.

Whether or not Republicans investigate the Biden administration’s obsessive-compulsive efforts to enrich Iran and its terror proxies at the expense of America’s Middle Eastern allies is their affair. But whatever happens in Washington, Israel needs a parliamentary probe of the Lapid-Gantz government’s shocking behavior. If this protection deal with Hezbollah is implemented, it sets not one, but multiple precedents that both separately and collectively place Israel’s national security and wealth in jeopardy.

Caroline Glick is an award-winning columnist and author of The Israeli Solution: A One-State Plan for Peace in the Middle East.