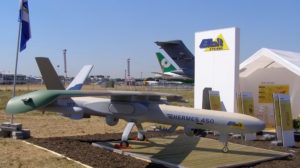 Within the past week, the Haifa-based Elbit Systems was awarded:
• $31.5 million contract for night vision systems to US Defense group,
• $300 million deal for command & control technology to Asia-Pacific client,
• $240 million deal to provide electronic defense systems to an African client.

Israeli defense contractor Elbit Systems announced a series of deals signed over the past week to the tune of over $570 million.

The Company also focuses on the upgrading of existing platforms, developing new technologies for defense, homeland security, and commercial applications and providing a range of support services, including training and simulation systems.

On Tuesday, the company announced that its U.S.-based subsidiary, Elbit Systems of America, was awarded a $31.5 million contract by the Defense Logistics Agency Land and Maritime, a combat support agency in the United States Defense Department, to provide it with aviator night vision imaging system head-up displays. The work will be performed over a two-year period.

The statement came on the heels of another deal, announced over the weekend, in which the company said it signed a $300 million contract to supply command and control systems to a large Asia-Pacific client. Elbit did not name the client, saying only the project will be carried out over the next three years.

“We are proud to be selected to provide a command and control solution, which is based on Elbit Systems’ cutting-edge technologies and operational experience,” Elbit President Bezhalel Machlis said. “We are considered one of the world’s leaders in the command and control field and we trust that other customers will follow this Asia-Pacific customer.”

Last Tuesday Elbit announced it had inked a $240 million contract to provide a wide array of defense electronic systems to an African nation. The company did not name the nation, saying the project will be carried out over the next two years.

Commenting on African deal Machlis said, “We are proud to have won this contract, allowing us to provide our customer with a variety of systems and capabilities from different fields, a growing trend we have witnessed lately in many countries.

“Our unique structure enables the customer to benefit from the synergy of its overall capabilities while, at the same time, focus on its requirements. Our portfolio, based on cutting-edge technologies and operational know-how, allows us to customize our solutions and tailor them to our customer’s needs, and we hope others will follow this trend.”