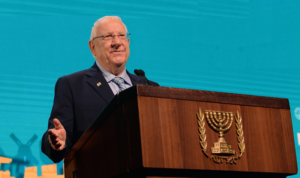 Israel’s President Reuven Rivlin at JFNA GA, 22. October 2018 – Photo: Mark Neiman (GPO) the establishment of a ‘Reverse Taglit-Birthright’ program during his address to the General Assembly (GA) of the Jewish Federations of North America (JFNA) on Monday, in what appeared to be an effort to bolster ties with Jewish diaspora communities abroad.

“We must increase Israeli exposure to your schools, camps and communities,” Rivlin said addressing 2000 delegates at the opening session of the three-day Tel-Aviv based conference. “They must realize they have a family,” he said.

Birthright in its current form is an educational organization that sponsors ten-day trips for Jews from around the world aged 18-26 to visit Israel. The majority of those attending the trip are from the United States or Canada.

“I support the idea of creating a “Reverse Taglit” trip for young Israelis to get to know Jewish communities worldwide,” Rivlin said, adding that together with the Ministry of Diaspora Affairs, he had already began developing an active community of delegates for exploring future partnership programmes.

In recent years there has been a growing divide between Israel and Diaspora Jewry who, especially in the more liberal streams of US Jewry, have felt increasingly isolated by the policies of the Jewish state.

Earlier this year, Charles Bronfman co-founder of Birthright, jestingly expressed establishing a “reverse-AIPAC” — an alternative to the powerful pro-Israel lobby in the US – to provide a way of advocating for the more liberal strands of Judaism.

Orthodox Jewish groups, which form a central plank in Israeli Prime Minister Netanyahu’s coalition government, have long pushed back against more liberal streams of Judaism, resulting in feelings of alienation among Reform and Conservative streams of Judaism which have a large representation in the United States.

Liberal US Jewish community leaders have spoken out over issues such as egalitarian prayer at Jerusalem’s Western Wall holy site, a proposed law that would not recognize conversions performed outside the Chief Rabbinate’s authority, the rising death toll on the Israel-Gaza border and the recent passage of the controversial Jewish nation-state bill.

“Just a week ago in the opening session of the Knesset, I said that our biggest threat is our inner war,” Rivlin continued in his address to the delegates, referring to the growing diaspora chasm. “We must establish the importance of our relationship as a value that is above debate,” he said.

The title of this year’s GA is “We Need To Talk” denoting a desire to patch-up differences between the two communities.

“I cannot agree more. We need to talk, we have to talk, and we need to listen. We are not ‘strategic allies’; we are family. We do not have ‘shared interests’; we have a shared fate, a shared history, and a shared future – a very bright one. It may not be easy to have a truly honest conversation, But this is, I believe, what needs to happen,” Rivlin continued.

Israel’s former opposition leader Isaac Herzog who was recently announced chairman of the Jewish Agency has vowed to bridge relations.

“We need to do whatever we can to unify the Jewish people and make sure the Jewish people are not torn apart,” Herzog said. “A Jew is a Jew, and it doesn’t matter what kippa he wears or does not wear and what stream he belongs to. We are one people.”

The Jewish Agency is a vital organization that connects diaspora Jews with Israel and decides on matters of immigration.