Groundbreaking surgical treatment designed to combat epilepsy that does not respond to drugs.

A patient with intractable epilepsy that has not improved with medications has undergone implantation of electrodes deep in his brain to stimulate neurons and halt his attacks. Prof. Itzak Fried of Sourasky Medical Center performed the surgical treatment, which has been a success thus far. It is available in some centers abroad but is not yet in the basket of health services, and has not been attempted on patients at other medical centers with expertise in deep brain stimulation (DBS). 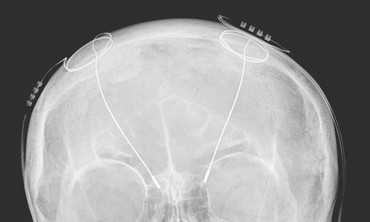 Fried, the head of the functional neurosurgery unit at the Tel Aviv hospital, said on Sunday, when the operation was announced, that he used a DBS system made by the Medtronic company based in Switzerland.

“It is a new treatment for patients who suffer from severe epilepsy that does not respond to medications.”

The hospital implants similar electrode systems in patients with Parkinson’s disease, dystonia (a neurological movement disorder in which continued muscle contractions cause twisting and repetitive movements or abnormal postures) and primary tremor. However, the electrodes for treating epilepsy are placed in a part of the brain different than the one accessed to treat the other neurological disorders, Fried said.

The electrodes are inserted through a small opening in the skull and implanted on the two sides of the brain. During the surgery, electrical activity of the brain cells in a specific nucleus is measured. The electrodes are connected to a “pacemaker” implanted on the side of the chest cavity under the clavicle and is controlled by an exterior remote control mechanism, Fried said. The implant is left in the brain permanently.

About one percent of the population suffer from epilepsy, a brain disorder that causes victims to suffer from repeated seizures.

These convulsions are episodes of disturbed brain activity that cause changes in attention or behavior. Almost a third of patients’ seizures do not respond well to medications.

In some patients, if the epilepsy is caused by a tumor or other diseased tissue in the brain, it can be removed to relieve the convulsions. However, in others, the cause of disturbed brain activity is not a tumor or surgery would cause severe brain damage and thus could not be performed. Thus, said Fried, DBS is a possible alternative.

There are some 60,000 epileptics in Israel, said Sourasky’s EEG and epilepsy unit Prof. Miri Neufeld. The DBS treatment, she said, opens the way for a new treatment for the 30% who have intractable cases.

DBS for Parkinson’s and dystonia patients was pioneered in Israel at Hadassah University Medical Center in Jerusalem’s Ein Kerem.

So far, some 100,0000 such patients have undergone DBS implantation around the world, including about 300 at Hadassah. Its leading DBS expert, Dr. Zvi Israel, told The Jerusalem Post on Sunday that while DBS for Parkinson patients is widely accepted, DBS for epilepsy is “more controversial.”

“It would be relevant for a very small number of patients. Prof. Fried has performed conventional surgery on epilepsy for years.

Our epilepsy program is almost two years old. Ichilov has a track record for epilepsy surgery. The choice of patients for DBS is key, and the problem is exactly where to locate the electrodes,” he said.

He added that there can always be complications with DBS implants, including infections and hemorrhages. In addition to Medtronic, another company named St. Jude Medical makes DBS systems, and it will soon be followed by Boston Scientific, Israel said.

“I don’t think DBS for intractable epilepsy will take off quickly any time soon. In the past, DBS for Parkinson’s was added to the basket of health services only when it was already performed on 25 patients,” he continued.

Hadassah has performed DBS on patients with intractable depression and Tourette’s syndrome. The procedure was made possible through the work of Prof. Hagai Bergman, president of the International Basal Ganglia Society and a researcher at the Hebrew University’s Interdisciplinary Center for Neural Computation and the Edmond and Lily Safra Center for Brain Research. Israel said Bergman has been tipped to win a Nobel Prize in Medicine and Physiology for his groundbreaking work.

The Hadassah expert said he and his colleagues are currently working on using DBS to treat schizophrenia in primates, even though the animal model is not identical to the human psychiatric disorder. DBS is also being tested abroad on intractable depression and obsessive-compulsive disorder that does not respond to medication.