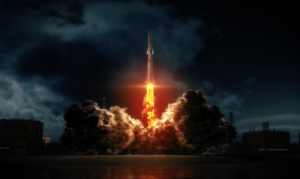 The spacecraft will be transferred to the US in November, before being launched in December, and plans are in place to land on the moon on February 13, 2019. If successful, Israel would become the fourth country to land a craft on the moon, after the US, the Soviet Union and China.

The SpaceIL spacecraft to be launched by Israel. – @TeamSpaceIL,Twitter

The spacecraft, which is shaped like a round table with four carbon fiber legs, will be launched from Florida’s Cape Canaveralon on a SpaceX’S Falkon 9 rocket in December, and then slingshot around the planet several times to reach the moon. Upon landing, the craft will relay photographs and collect data about the moon’s magnetism for research by Israel’s Weizmann Institute.

“We will put the Israeli flag on the moon,” said Dr. Ido Anteby, CEO of SpaceIL. “It’s a small, smart spacecraft, it has a 2 meters diameter, its height is about 1.5 meters (3.2 feet), it weighs 600 kilogram, and will land on the moon at the weight of 180 kilograms.”

Unlike other spacecrafts, which took several days to reach the moon, SpaceIL’s spacecraft will take longer. The launcher will release the spacecraft at the height of 60,000 kilometers, and to save fuel, it will enter an elliptical orbit around the Earth until it reaches the moon.

According to Dr. Anteby, the landing is the most complicated part of the journey.

“The spot chosen is relatively flat and the spacecraft will have eye contact with the Earth … Once the spacecraft reaches the landing point, it becomes completely autonomous, the engines block it until it reaches the ground … The first step will be to put up an Israeli flag on the moon,” he said.

The lunar mission is scheduled to last just two days after it touches down. But the SpaceIL team hopes that putting an Israeli-made module on the moon could help maintain Israel’s technological momentum for years to come.

The competition is over, but the work continues

SpaceIL is a non-profit organization established in 2011 and was founded by three young engineers: Yariv Bash, Kfir Damari and Yonatan Weintraub, who entered a global competition organized by Google’s Lunar Xprize.
Three groups from around the world originally registered for the competition, which opened in 2007. The contest was a modern international race between private groups to land an unmanned spacecraft on the moon. Within a few years, most of the competitors dropped out due to the complexities and challenging invovled, leaving only 16 teams to battle it out.

Later, Google Lunar Xprize announced that a group that would not be able to sign a contract until the end of 2016 would be automatically be removed from the race. Besides SpaceIL, the finalists were companies hailing from Japan, the US, India and the international company Synergy Moon. In January of this year, the $20 million competition was scrapped by the tech giant when it became clear none of the five companies would meet the deadline.

Despite financial pitfalls in recent years that nearly saw SpaceIL’s spacecraft grounded permanently, the team is confident that December’s launch will take place on time.

The $95 million project was largely funded by South African-Israeli billionaire Morris Kahn and other donors. Kahn, SpaceIL’s main donor and president, spoke about his meeting with the three founders of SpaceIL.

“I thought it was a great idea and I asked them if they had money, so they replied ‘money? What’s money? They didn’t think about money, so I funded the project and told them to start working. They told me at first that the project will cost about $8 million. It eventually cost $95 million,” the tycoon said.

“It is a tremendous achievement”, Kahn added while thanking IAI. “Without you this would not have happened, this project will take the aerospace industry into deep space … We will all remember where we were when an Israeli spacecraft landed on the moon,” he proudly stated.

The sky is not the limit

Joseph Weiss, IAI’s President and CEO, shared his thoughts on the plan at the press conference at the company’s facility outside Tel Aviv.

“I am proud and excited to be here at the announcement of the launch and landing dates of the first Israeli spacecraft to the moon. This is a national history in the making. As the president of IAI, an industry which many years ago placed Israel in the small group of countries that develop and transmit satellites, IAI’s commitment to the innovative SpaceIL project was natural,” he said.

“The cooperation of SpaceIL and IAI is an example of the amazing capabilities that can be accomplished in civil space activities—activities that combine education, technology, industry, knowledge and a great deal of entrepreneurship.

“On a personal note, seven years ago I first heard about SpaceIL. I had no doubt that IAI, would take part in this ambitious and unique project. I followed the project since its inception as the director of missile and space divisionat IAI. I continued to be involved in my years as CEO,” he continued.

“The path to the moon is paved with challenges, but thanks to the professionalism, determination and faith of all those involved in the project, an Israeli spaceship will be launched into the moon, and IAI will continue to do everything necessary in the coming months to ensure the success of this national mission. It is customary to say that the sky is not the limit, we at IAI say that space is not the limit, and soon we will add that the moon is not the limit,” he concluded.

According to Weiss, the aim of the mission is not only to stamp Israel’s footprint on the moon, but to inspire a future generation of Israelis to pursue careers in math, science and engineering.

Israel has emerged as a technological titan in recent decades, producing a profusion of high-tech companies and drawing heavy international investment. Much of the module’s onboard computers were developed and produced locally.

“What we’re doing is we’re trying to replicate the Apollo effect in the United States,” Morris Kahn told reporters, referring to the surge in interest in science and engineering after the US space program landed on the moon in 1969.