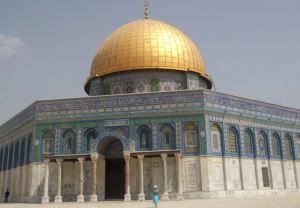 After the Waqf, the Jordanian body that oversees the Muslim religious site in Jerusalem spoke with Muslim leaders, Jerusalem’s Grand Mufti encouraged worshipers to return to pray atop the Temple Mount.

By Reuters and Elior Levy

Jerusalem Grand Mufti Mohammed Hussein and Muslim elders encouraged worshipers to return to pray at Jerusalem’s Al-Aqsa Mosque on Thursday after deeming that Israel had removed all security measures installed after a deadly terror attack in the Old City earlier this month that sparked a prolonged period of violence.

The elders announced their decision after a report from the Waqf, a Jordaninan-backed body that oversees the Muslim religious sites in Jerusalem. Israel installed metal detectors, cameras and other measures following a July 14 attack in which two policemen were shot dead. Days of violent protests followed, with both the Palestinian Authority and the Hamas terror group twice calling for a ‘day of rage.’

With the new decision, which should signal a winding down of tensions between Israel and the Arab world, the Waqf called on worshipers to make their way to the Al-Aqsa mosque at 4pm on Thursday.

During a press conference after Israel had removed all the latest security facilities Jerusalem Police Commander Yoram Halevi warned the worshipers, or any terrorists, not to push Israel any further.

“Don’t try us. Don’t test us because we know how to respond sharply and vigorously,” Halevi said. “We are people in uniform, people who get act. As long as the political echelon instructs us operationally, we will carry out (as required—ed).”

Halevi also added that the decision for removing the security facilities ultimately lay with the political echelons, gainsaying previous claims that full responsibility had been granted to the police.

“We have our opinions and we are making them heard. The bottom line is: what the political ranks decided we executed, we are implementing it and we will do in the future.”

With that said, Halevi assured that every suspicious individual would be checked who “could disrupt order or cause harm. He will be stopped at the gate and will be checked. We will continue to be there and to manage life routines based on the knowledge that there will be those who try to exploit this situation to celebrate.”

Palestinian Authority President Mahmoud Abbas issued a statement saying that he had been in close contact with Jordan, Saudi Arabia and Morocco on all matters pertaining to the Jerusalem crisis.

Hamas leader Ismail Haniyeh praied the “Jerusalem residents and their robust stance against the enemy.”

“What happened is but one chapter of respect out of many victorious chapters and the beginning of Israel’s defeat. Jerusalem is Arab and Islamic territory and will stay as such. We will not agree to splitting it. A watchful eye will stay on Jerusalem we will not allow the occupiers to defile our Al-Aqsa,” the statement continued.

Jordan’s Minister of State for Media Affairs Mohammad Al Momani also issued a statement insisting that “Israel, as an occupying force, has no right to take steps that change the status quo.