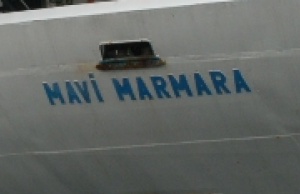 The Mavi Marmara incident occurred when IDF soldiers boarded the ship after the Islamists on board, who claimed they were carrying humanitarian aid for Gaza, refused to reverse course and dock at the Ashdod Port.

As soon as they boarded the ship, the soldiers were attacked by the Islamists with clubs and knives, forcing the troops to open fire and killing 10 of those on board.

Upon inspection it was discovered that there was no humanitarian aid whatsoever aboard the Marmara. After the raid Turkey angrily cut off ties with Israel.

As part of the reconciliation agreement in June, Israel also paid $20 million in compensation to Turkey for the Marmara incident.

In addition to the lawsuit being dropped, an arrest warrant for the four charged was also withdrawn, Gulden Sonmez, a lawyer for the victims, wrote on Twitter after a closed door hearing in Istanbul.

Mustafa Ozbek, a spokesman for the Humanitarian Relief Foundation (IHH) group which organized the flotilla in 2010, confirmed to AFP that the case had been withdrawn.

The decision had been expected after the prosecutor told the Istanbul court last week that the case against the Israelis should be dropped because of the agreement.

Before the verdict was read out, tumult erupted in the courthouse as lawyers and supporters of the victims denounced what they said was a travesty of justice, according to AFP.

Lawyers and families walked out of courtroom shouting “damn Israel” and “Mavi Marmara our honor”.

“No matter what court decides about those who committed the crime… we believe that they were convicted by both the law and the conscience of the people,” said the victims’ lawyer Yasin Samli.

Under the agreement signed in June, Israel also agreed to allow Turkish aid to reach Gaza, and both sides also agreed individual Israeli citizens or those acting on behalf of the Israeli government would not be held liable — either criminally or financially — for the raid.

One of the final key elements of returning to normal relations was the exchange of ambassadors.

Despite the reconciliation deal, Erdogan refused to tone down his anti-Israel rhetoric in an interview with Israeli journalist Ilana Dayan two weeks ago, even as he called for a “new page” in Israel-Turkey relations.

In the interview, Erdogan refused to take back his past verbal attacks against Israel, including a statement that Israel’s attacks against terrorist targets in Gaza during Operation Protective Edge were more barbaric than Nazi leader Adolf Hitler’s actions.

Nevertheless, Erdogan and Israeli President Reuven Rivlin held a phone call last week, during which Rivlin thanked Erdogan for his country’s assistance in fighting the recent fires in Israel.