Jewish groups upset over Trump’s ‘Inappropriate’ comparison to the Nazis 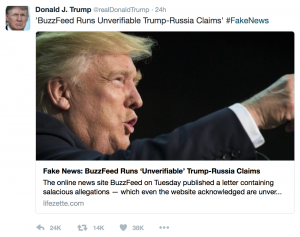 The leader of Britain’s Jewish community denounced Trump’s choice of words. “The Board of Deputies of British Jews constantly condemns the misuse of Nazi and Holocaust language, and the president-elect’s references to Nazi Germany are completely inappropriate.”

The Anti-Defamation League said a remark made Wednesday by US President-elect Donald Trump comparing media reports about him to Nazi-era propaganda calls for an apology.

“No one should cavalierly draw analogies to Nazi Germany, especially the next leader of the free world,” ADL national director and CEO Jonathan Greenblatt said. “It is not only a ridiculous comparison on the merits, but it also coarsens our discourse and diminishes the horror of the Holocaust. It would be helpful for the president-elect to explain his intentions or apologize for the remark.

“There are legitimate questions on all sides regarding foreign influence in the 2016 presidential race,” he added. “But the United States has democratic elections, a free press, rule of law and a civil service – including our intelligence agencies – that is deeply loyal to the US Constitution. These facts invalidate any analogies between America and totalitarian societies.”

Trump made the offending remark on his Twitter account in response to reports that Russia has a dossier with compromising personal and financial information about him.

“Intelligence agencies should never have allowed this fake news to ‘leak’ into the public.

One last shot at me. Are we living in Nazi Germany?” the president-elect tweeted early Wednesday morning.

The American Jewish Committee tweeted back: “We regret @realDonaldTrump’s use of Nazi Germany regarding the media – an inappropriate comparison that diminishes the horrors of that time.”

Intelligence agencies should never have allowed this fake news to “leak” into the public. One last shot at me.Are we living in Nazi Germany?

Steven Goldstein, executive director of the Anne Frank Center for Mutual Respect, called for Trump to retract the tweet.

“It is a despicable insult to Holocaust survivors around the world, and to the nation he is about to lead, that Donald Trump compares America to Nazi Germany,” Goldstein said in a statement. “The president-elect has denigrated our nation and its commitment to freedom on the eve of his inauguration. He must retract his tweet and apologize to survivors and to our entire nation.”

The leader of Britain’s Jewish community also slammed Trump’s choice of words. “The Board of Deputies of British Jews constantly condemns the misuse of Nazi and Holocaust language, and the president-elect’s references to Nazi Germany are completely inappropriate,” Board of Deputies president Jonathan Arkush told The Jerusalem Post.