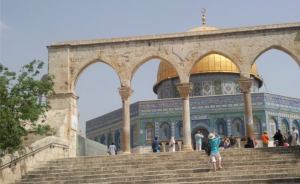 After being arrested for bowing on the Temple Mount, a Waqf employee approached the Jewish visitor and kicked him in the stomach while he was in handcuffs.

A personal claim of NIS 30,000 was filed against a Waqf employee on the Temple Mount for attacking a Jew and kicking him in the stomach.

The Jewish man had participated in a visit to the Temple Mount six months ago. During his visit to the holiest site in Judaism, the man bowed.

The police arrested the man for exercising his freedom of religion. As he was put in handcuffs, the Waqf employee approached him and kicked him in the stomach.

The kick was recorded on video by another one of the visitors on the tour. The Waqf employee, a resident of the a-Tur neighborhood in Jerusalem was arrested by the police on the spot.

The lawsuit was filed by attorney Haim Bleicher of the Honenu legal organization.

The suit was filed in the Magistrate’s Court in Jerusalem for humiliation and injury to the plaintiff and for the Waqf employee’s role in the humiliation and and intimidation of Jewish visitors to the Temple Mount.