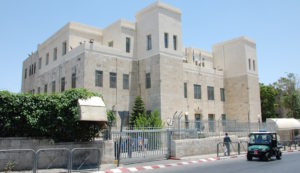 The Jerusalem District Court named jailed Palestinian terrorist Marwan Barghouti as one of the 7 liable to compensate relatives for the 2001 shooting that killed three family members during the Second Intifada.

An Israeli judge has ordered the Palestinian Authority and perpetrators of a deadly 2001 attack to pay $18 million in damages to relatives of those killed, the court said Sunday.

The Jerusalem District Court named imprisoned Palestinian Fatah leader Marwan Barghouti as one of the seven liable to compensate relatives for their role in the shooting that killed three family members.

The ruling, handed down on Thursday by justice Moshe Drori, awarded the relatives 62 millions shekels ($18 million, 15 million euros), which is to be divided between the PA, which would pay 40 percent, and the seven Palestinian perpetrators, who would pay 60 percent.

The attack, which took place on a West Bank highway on August 25, 2001 during the Second Intifada, claimed the lives of Yaniv and Sharon Ben Shalom, a couple, and Sharon’s brother Doron Sviri.

The terrorists ambushed the car carrying members of the Israeli family and sprayed bullets into the vehicle. Ben Shalom’s infant sisters were wounded in the attack and their mother died whilst shielding them with her own body, reported Haaretz.

The families had sued the PA and as well as the perpetrators, among them Barghouti.

Barghouti is serving prison terms for his position as the leader of Al-Aqsa Martyrs Brigades, an armed offshoot of Palestinian leader Yasser Arafat’s Fatah group that has claimed responsibility for numerous attacks. He has not appeared in court to counter the accusations.

Justice Drori found the PA liable as it had encouraged the attacks and effectively was an accessory by supplying the guns to the security forces that were ultimately used and by funding the perpetrators.

It was not immediately clear if the family would take the money from the PA and imprisoned Palestinians, and how.