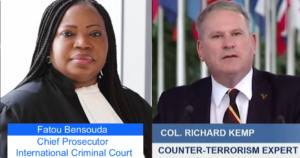 Now Bensouda and the ICC have joined the international campaign aimed at eliminating the Jewish state, led by al-Huseini’s successors. In a grotesque inversion, the ICC, heir to the Nuremberg war crimes tribunal, has become a propaganda weapon of anti-Semitic hate. This represents a shameful betrayal of its honourable anti-Nazi progenitor. Its path more closely resembles that of the Nazis’ notorious People’s Court, the Volksgerichthof, than the Nuremberg trials.

How is #ICC Prosecutor #FatouBensouda‘s tweet remotely true?
1) ‘Palestine’ is NOT a sovereign state, not complying with the 3 requirements of becoming sovereign under UN requirements & int’l law
2) Israel isn’t a signatory of the Statutes!

So, antisemitism is obviously in play

Nuremberg laid low many of the Nazi monsters that perpetrated the Holocaust. The ICC chief prosecutor’s hand is now controlled by organizations linked to the 3rd Reich. The Palestinian Centre for Human Rights, Al-Haq, Addameer and Al-Dameer.

Palestinian NGOs backed by EU and Swiss funds, have been lobbying the ICC to bring prosecutions against Israel for more than a decade according to the Israeli research institute NGO Monitor. All are connected to the Palestinian group PFLP whose founding leaders in the 1970s were trained in terrorism and political warfare by former SS Colonel Otto Skorzeny and Dr Gerhard Hartmut von Schubert, once of Josef Goebbels’s propaganda ministry.

Instigator of the ICC investigation was Palestinian Authority President Mahmud Abbas, a man so immersed in Jew hate he wrote a doctoral thesis denying the Holocaust. He published it as a book in Arabic entitled The Other Side: The Secret Relationship Between Nazism and Zionism, in which he suggested that Jews killed by the Germans were in fact victims of a Nazi-Zionist plot. Today Abbas presides over an administration that incentivises terrorists who kill Jews by paying them salaries as well as openly endorsing their murderous crimes.

Abbas’s book betrays one of the main tactics used in the political warfare campaign against the Jewish state, branding them with the very war crimes that were perpetrated against their people: genocide, mass murder and forcible population transfer.

Joining this campaign, Bensouda says that, after a five-year preliminary examination: “I am satisfied that war crimes have been or are being committed in the West Bank, including East Jerusalem, and the Gaza Strip”. But no objective examination of the facts could have led her to that conclusion. It could only have reached this point after false accusations of war crimes became normalised over many years of political warfare, just as the Nazis normalised warfare against the Jewish people in Germany. As Hitler wrote: “Propaganda tries to force a doctrine on the whole people… Propaganda works on the general public from the standpoint of an idea and makes them ripe for the victory of this idea.”

How has this normalisation come about? By decades of relentless anti-Israel propaganda in universities and schools, the media, political parties, so-called human rights groups and international organizations such as the EU.

Israel has been long been singled out for special treatment by the UN. According to the NGO UN Watch, in the 2019-2020 session of the UN General Assembly, a total of only 7 resolutions have been adopted against the rest of the world with 18 against Israel alone. In that period only two criticisms have been made against Syria despite hundreds of thousands dead and millions displaced. None have been levelled against some of the world’s worst human rights violators including China, Pakistan, Venezuela and Algeria. Israel is the only country in the world that is the subject of a permanent agenda item at the UN Human Rights Council.

The ICC prosecutor accuses Israel, during Operation Pillar of Defense in 2014, of using disproportionate force in Gaza, willfully killing and causing serious injuries to civilians and intentionally attacking protected individuals and locations. She alleges that the IDF committed war crimes against Gazans violently attempting to breach the border into Israel in 2018 and 2019.

I was present during these conflicts, witnessed and was extensively briefed on IDF operations. I was a member of an investigation into Operation Pillar of Defense by the High Level Military Group, an independent body of retired generals from Western armed forces and human rights experts. The group unanimously concluded that: “The IDF not only met its obligations under the Law of Armed Conflict, but often exceeded these on the battlefield.”
General Martin Dempsey, at the time Chairman of the US Joint Chiefs of Staff, commented: “Israel went to extraordinary lengths to limit collateral damage and civilian casualties.” My first-hand observations during the Hamas-instigated Gaza border violence in 2018-19 echo these assessments.

Israel and Stuff debunks the ICC legitimacy over Israel in the disputed areas.

If Bensouda’s accusations are demonstrably false, her third allegation, that Israel has committed war crimes under Article 8 of the Rome Statute by transferring parts of its civilian population into occupied territory, can only be described as outrageous.

The West Bank, east Jerusalem and the Gaza Strip are not “occupied territories”. They are disputed territories but are not and have never been the territory of any sovereign state other than Israel. The suggestion that willing tenancy on this land by Jews is intrinsically illegal sees the ICC prosecutor adopting the Nazi concept of Judenrein, cleansing an area of Jews. Despite situations where such crimes have actually occurred, including Northern Cyprus and Crimea, no prosecutions for war crimes in this category have ever been brought against anyone. Special treatment is again reserved for the Jewish state.

Not only have Bensouda’s accusations been enabled by normalisation of anti-Israel hate, but she is intent on illegally contorting the ICC’s mandate to force the Jewish state into the dock. Jurisdiction only applies where alleged war crimes have been committed by a state which lacks the capability and political will to investigate and take action itself. The opposite is true of Israel, which has an internationally respected judicial system and a track record of prosecuting battlefield crimes.

The ICC’s jurisdiction is also limited to accusations made by sovereign states. The Palestinian Authority is not by any definition a sovereign state. The prosecutor believes otherwise and has requested the ICC’s pretrial chamber to rule.

The US and Australia have both condemned Bensouda’s decision to proceed with her investigation, an unprecedented step. Britain, itself under improper ICC preliminary examination for alleged war crimes in Iraq, should take up the cudgel. If the pretrial chamber decides the ICC has jurisdiction, as a party to the Rome Statute, the UK should appeal its judgement and enlist the support of Australia and Canada, also state parties.

Bensouda’s announcement has already been seized upon by Israel’s enemies. If her investigation goes ahead, whatever the outcome, that alone will be enough to incite and encourage violence against Israelis and Jews everywhere. If her decision was based upon an objective legal assessment that price would have to be paid. But this is a politically-motivated move, intended by those behind it to redouble the anti-Israel propaganda campaign.

If it does proceed Bensouda and her fellow ICC officials, as well as those who support or fail to fight her actions, will have blood on their hands.

Col. (ret.) Richard Kemp has spent most his life fighting terrorism and insurgency, commanding British troops on the front line of some of the world’s toughest hotspots, including Afghanistan, Iraq, the Balkans and Northern Ireland.

He is now a writer, a prolific journalist, media commentator and motivational speaker.