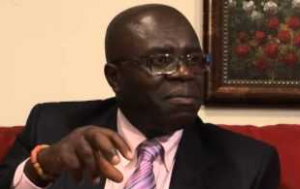 King Ayi of Togo says everyone in his West African nation has long known they were Jews, having long kept Jewish biblical customs, such as various kosher dietary laws, circumcision on the 8th day after birth, & observing the Sabbath.

King Ayi of the West African nation of Togo arrived in Israel on Sunday with an unusual request – he wants the Jewish state to officially recognize his people as a lost tribe of Israel.

The king, who has become well known among the Orthodox Jewish community, met with Religious Affairs Minister David Azulai, who told the African ruler that Israel’s Chief Rabbinate will have to investigate his claims to being descended from Israel.

“My desire is to come to the Western Wall with my people next Sukkot and shout ‘Shema Israel,’” the king told his Israeli hosts.

In an interview with the Orthodox Israeli news portal Kikar Hashabbat, King Ayi explained that “a nation that does’t recognize God and has no religion is a nation that doesn’t know where it is going. …I can tell you that as a professor of religion, there is no religion as close to my heart as Judaism.”

Asked how he discovered his own Jewish heritage, King Ayi said that “our teachers in Togo taught us that we are Jews. Before Togo became a republic, it was a kingdom known as ‘the Jewish Kingdom of West Africa.’ Our founding fathers came from Israel over 2,000 years ago.”

The king noted that his people have long kept Jewish biblical customs, such as various kosher dietary laws, circumcision on the eighth day after birth, and observing the Sabbath.

He went on to state that all the kings and queens of Africa must come “and see what the God of Israel has done.”

Responding to skepticism concerning the Jewish roots of Togo, King Ayi said that any who doubt need to “go read the Torah, where it is written that the lost tribes are beyond the River Sambation [the legendary ‘Sabbath River’ beyond which the 10 Tribes were supposedly exiled]. In the Last Days, all Jews in the world will be discovered, and people from afar will return…”