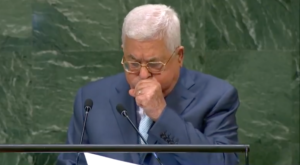 Naturally, he started by blaming Israel, which he notably called a “colonial” enterprise, thereby reaffirming that he still does not recognize the inalienable right of the Jewish people to exercise sovereignty in their ancient homeland.

For many Israelis, there was no point listening any further. The right of the State of Israel to exist as the national home of the Jewish people per UN Resolution 181 (the UN’s accompanying map [above, left] even labels the territory as “Jewish State”) is a cornerstone for genuine peace in the region. If the Palestinian leadership can’t even get that part right, then how can Israel trust them on other issues?

But, whether or not Israelis were paying attention, Abbas continued, confident that the Israel-loathing General Assembly would eat up his words.

He then turned on US President Donald Trump, whom Abbas accused of launching an unprovoked “assault” on the Palestinian Arabs by actually holding them accountable for their actions. Twenty-five years into the “Oslo” peace process, the Palestinians aren’t unaccustomed to being taken to task for their numerous violations of signed agreements.

Speaking of those violations, Abbas saved his most vitriolic remarks for Hamas. Of course, he left out the part about how Hamas would never have been able to militarily seize control of the Gaza Strip had Abbas’ Palestinian Authority honored its commitment to disarm the various terror groups operating under its auspices. “One authority, one gun” was the promise they made, and then proceeded to systematically violate.

Unable to now handle a problem of his own making, Abbas is set to cut all funding to the Hamas-ruled Gaza Strip (and he criticizes Trump for doing the same to him?), knowing full well the outburst of violence it will prompt, probably toward Israel.

But the most ludicrous moment came when Abbas challenged his audience to tell him if the Palestinians had ever “committed a single mistake in our long journey.”

Never mind the decades of terrorist activity prior to 1993 (such as the 1972 Munich massacre of Israeli Olympic athletes or the 1976 Entebbe hijacking, not to mention numerous bloody attacks inside Israel) or the two enormously destructive “intifadas” that were at least tacitly approved by the Palestinian leadership.

What made Abbas’ assertion most silly was that it came in the very same speech in which he so harshly lambasted Hamas, a Palestinian organization voted to lead the Palestinian parliament by a firm majority of Palestinian voters.

For a people who have somehow never made any mistakes, Abbas sure had a lot of criticism for the Palestinians’ elected representatives.

It’s precisely these types of nonsensical diatribes based on anything but reality and truth that make it so difficult for Israelis, and a growing number of world leaders, to take Abbas seriously as a negotiating partner.