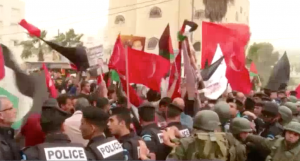 Newly passed legislation will prevent foreign individuals and/or organizations that have called or supported a boycott of Israel, from receiving an entry visa or residency permit, and prohibits foreigners from operating within the lands of the State of Israel to advance boycott, divestment or sanctions against Israel.

The Israeli Knesset on Monday evening passed a controversial law that bans the issuing of visas and residency permits to foreign citizens who call for boycott, divestment and sanctions against Israel, effectively banning them from being able to visit the Israel.

The law will apply to any foreign citizen who publicly calls for a boycott of the State of Israel or works for an organization supporting a boycott.

According to the text of the bill, the BDS movement represents the “new front in the war against the State of Israel, which has stopped Israel from preparing against it as necessary.”

“The proposed law will prevent people or representatives of companies, foundations or groups calling for a boycott of Israel from operating within the lands of the State of Israel to advance their ideas,” the bill reads.

The law, which received broad support from both right-wing and centrist parties, passed by a vote of 46-28 on its third and final reading.