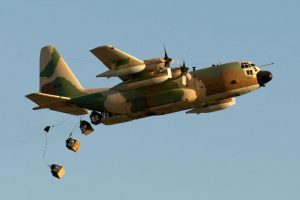 The C-130J heavy transport plane is able to fly over 4,000 kilometers and equipped with cutting-edge avionics along with an advanced anti-missile defense system that deploys decoys, allowing the plane to maneuver away from the threat.

A ceremony at Nevatim Airbase led by Brig.-Gen.Eyal Greenboim and the commander of the Elephant Squadron Lt.Col. “H” was held Sunday to mark the arrival of the latest C-130J, known in Israel as “Samson” and Super Hercules in the US.

“The aircraft improves the capabilities of the Air Force and the heavy transport division,” read a statement released by the IDF’s Spokesperson’s Unit.

The IAF procured seven C-130J Super Hercules from American aerospace giant Lockheed Martin, with the first delivered to the “Elephants” Squadron based at the Nevatim Airbase in southern Israel in April 2014.

The transport plane is able to fly over 4,000 kilometers and has cutting-edge technology such as an anti-missile system which along with the plane’s electronic warfare system can deploy flares upon detecting a missile allowing the plane to maneuver away from the threat.

Last May two IAF pilots were sent to a military jail over a near-collision by two C-130J planes during Israel’s Independence Day fly-over. During the investigation into the incident it was discovered that the pilots did not observe the rules of caution to keep a safe minimum distance in order to prevent any collision.